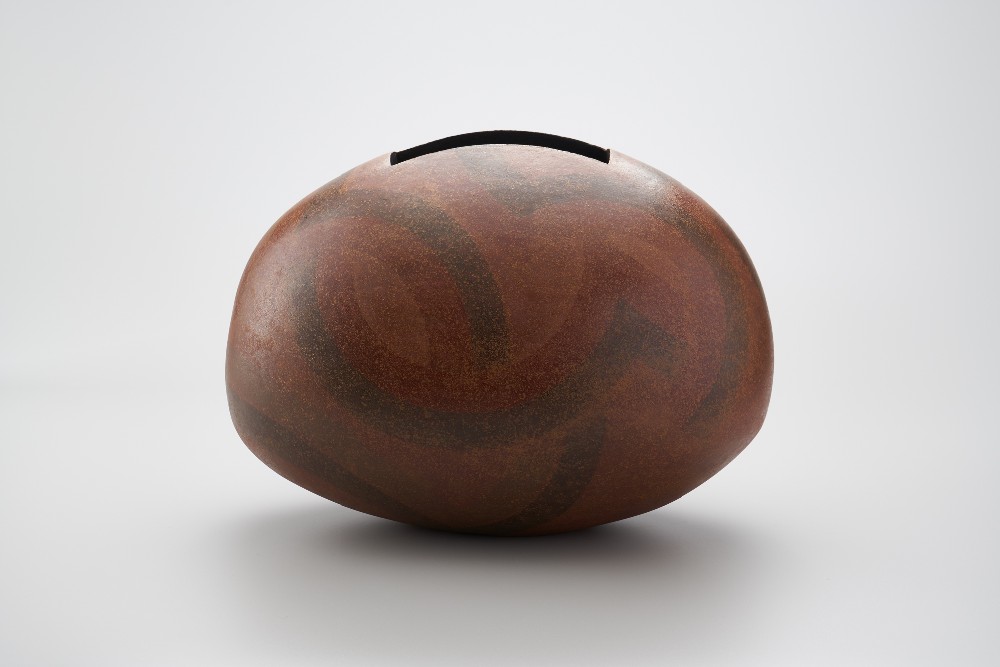 I am sympathizing with the many heritages created by human beings and have expressed the present instant of the beauty that has been changing for a long time. 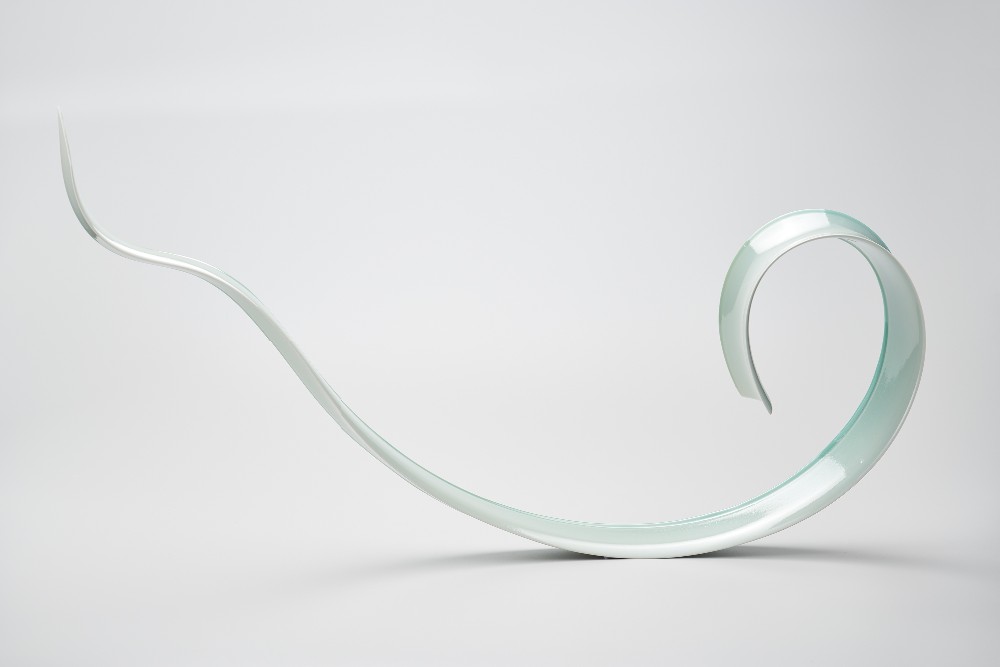 The theme of my work is to leave reverberation in a space. Within the process of producing my work, I felt that the porcelain potter’s wheel suits best and also extinguishing the texture and using the potter’s wheel as a tool and technique to make the clay thinner, is most appropriate. I want to create a space while interweaving the relationship between material and technique. 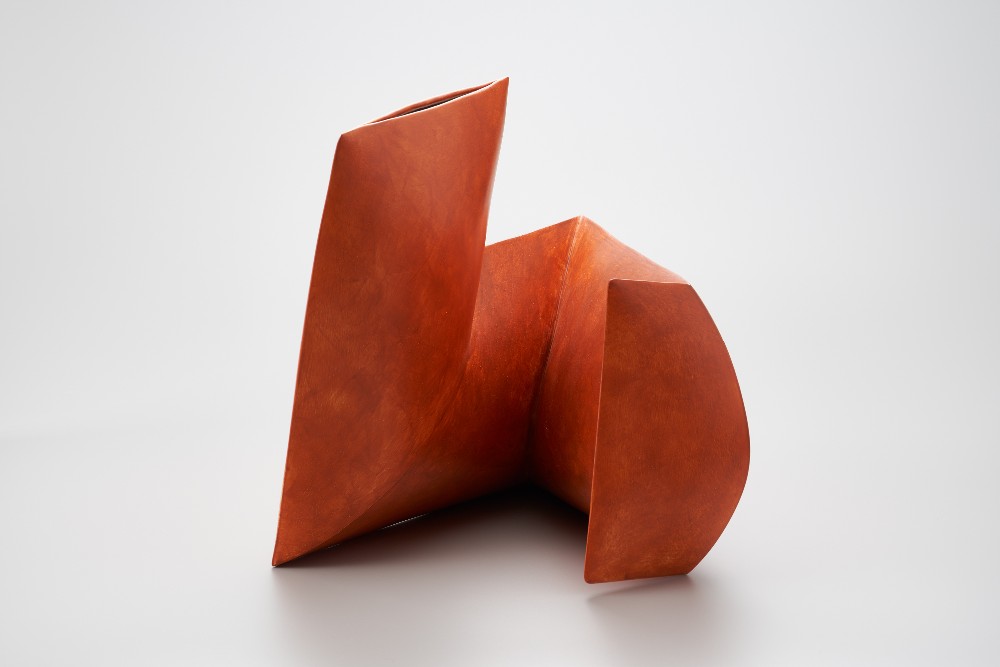 I formed the work pasting the slabs together and after it was drying, I repainted the terra sigillata onto its surface. I did the glost firing at 1050°C. By SILENTE, I expressed a quiet place in which time passes by even without that one can hear a sound.

The interesting point of this work also being its concept is to see in which way the space that surrounds the vessel lets exist a contradictive feeling of the air. It seems as it was like the space surrounding the Japanese tea house “Taian” of the Myōkian temple in Kyoto with its planned vigorous movement on the backside of its simplicity. 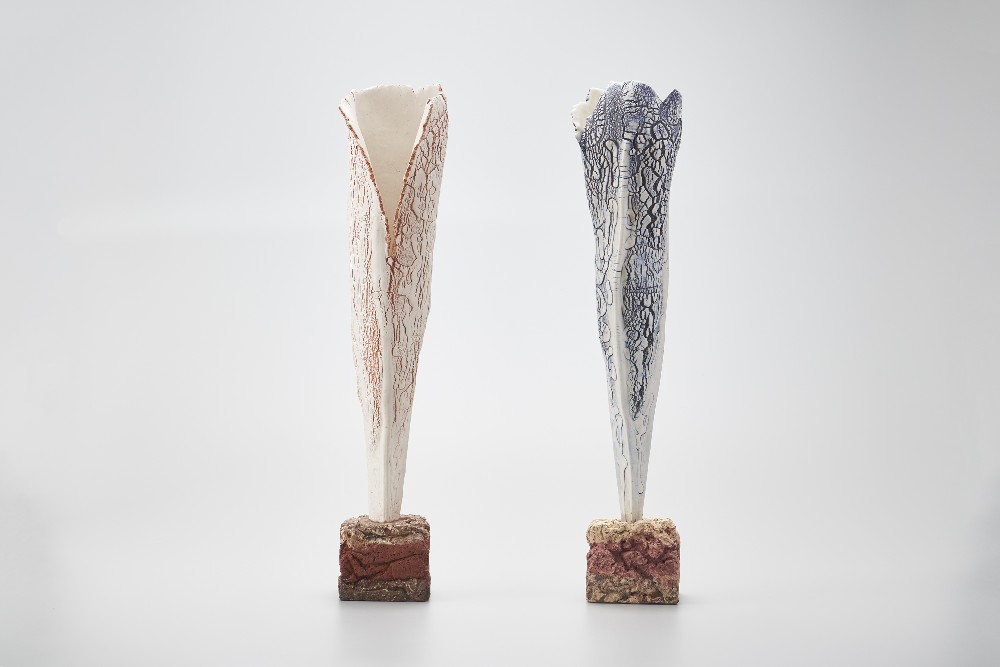 When expanding the clay that has a feeling of dryness (extent varies) with strong power, an aesthetic and strong ryūha design appears which looks like flowing water. After tessellating “scarlet color” for the exhibit on the left side and “zaffre” for the exhibit on the right side, the works were set on the objective that was formed of mud and were fired. I am thoroughly investigating this method which is being called mud drying method. 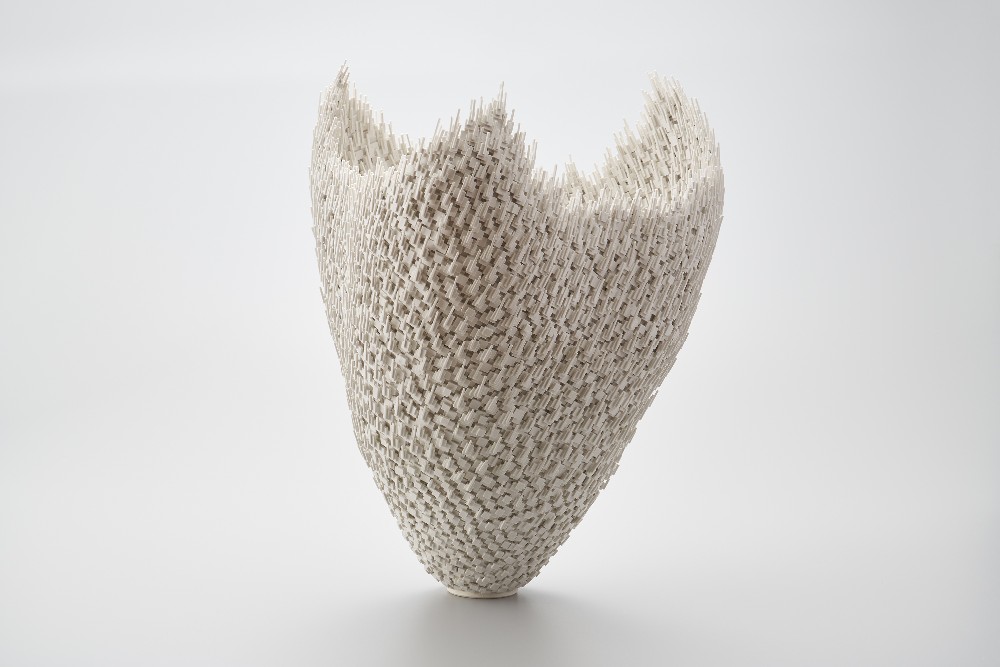 I am creating my work by putting inorganic material as a characteristic of porcelain, light, and shadow as a theme. As a form making clear the existence of light and shadow, the work is constructed hierarchically by squared chips.  By this, the work sublimated to a “geometric structure” with a removed arbitrary feeling. 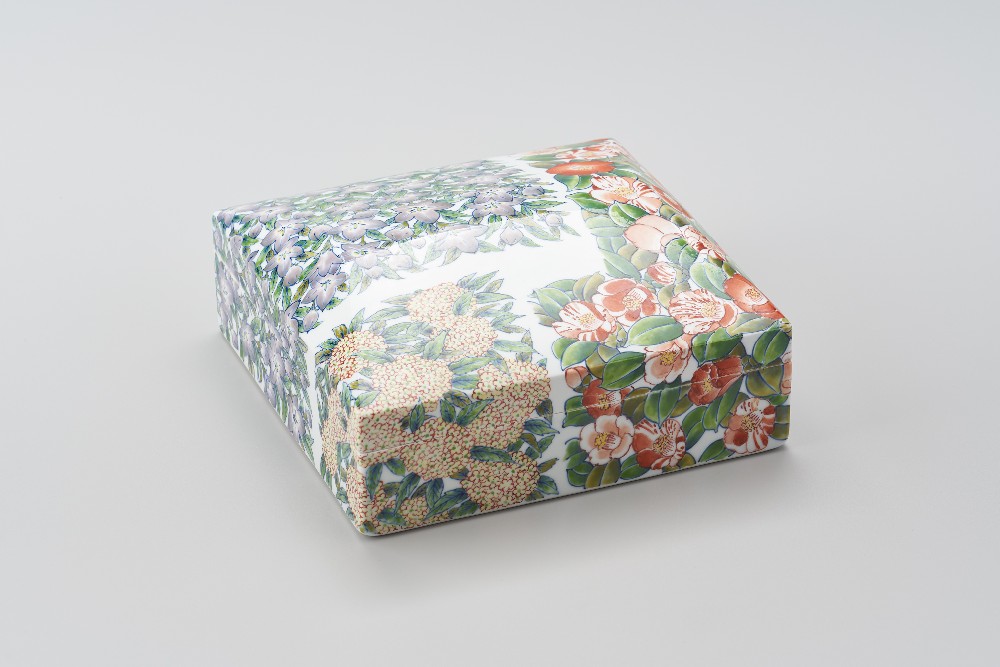 I hollowed out the work, put iron red overglaze on it and fired the work. 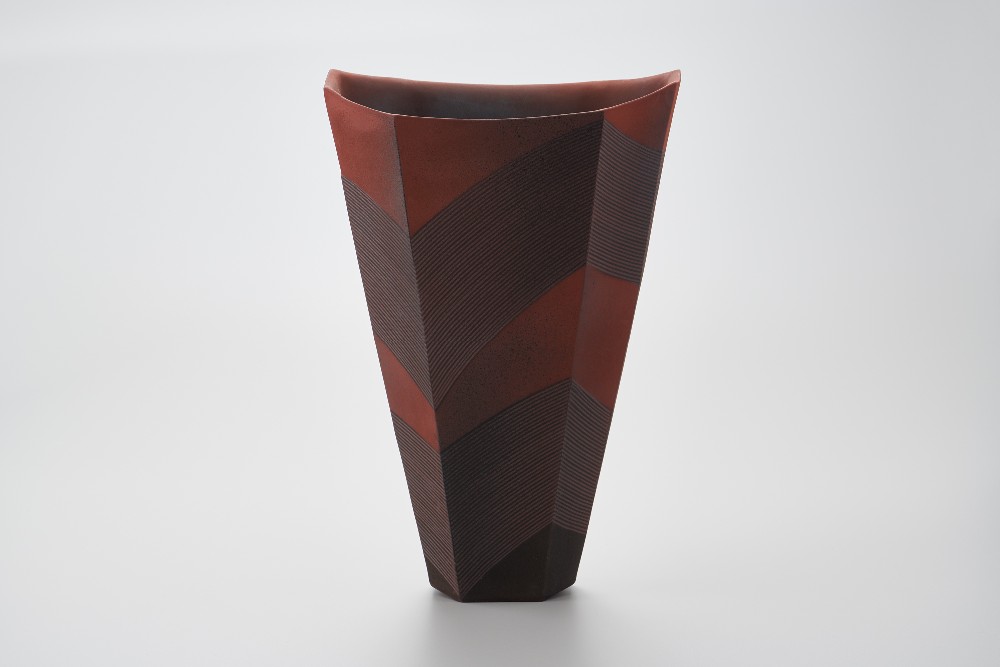 I created this exhibit on a plate with porcelain clay. Towards the molding that is extending vertically, I put motion onto the horizontal wave line segments. 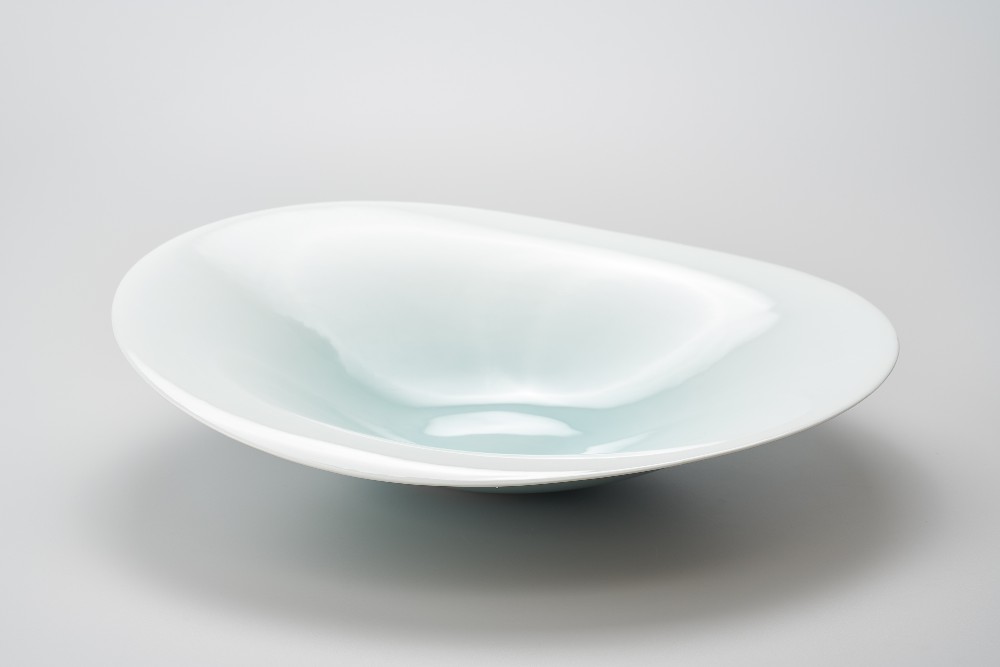 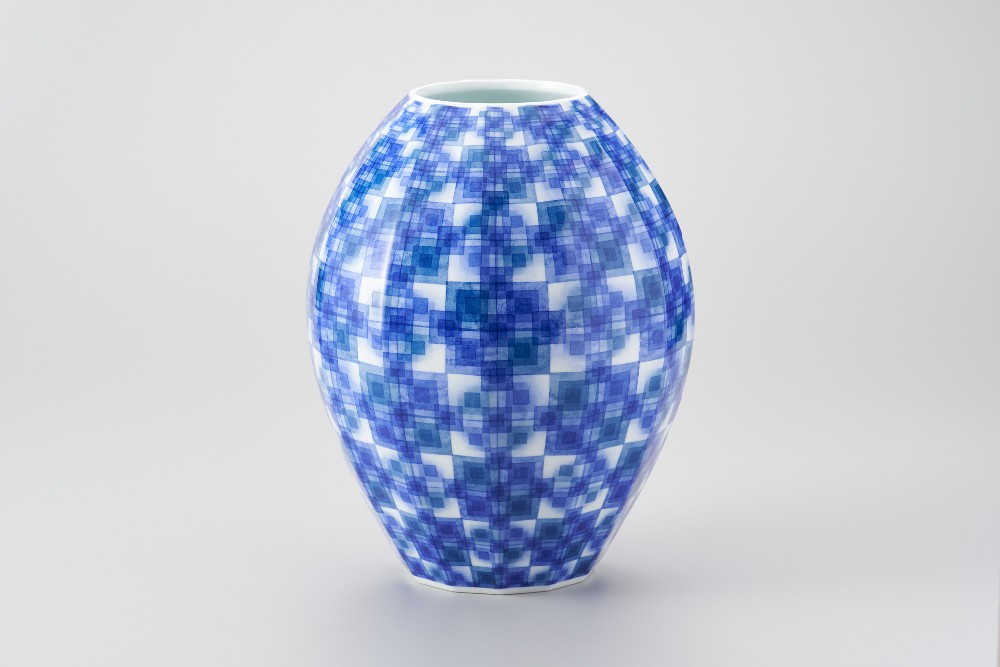 I laid over Japanese paper of different sizes and used the technique of gradation creating intensity. 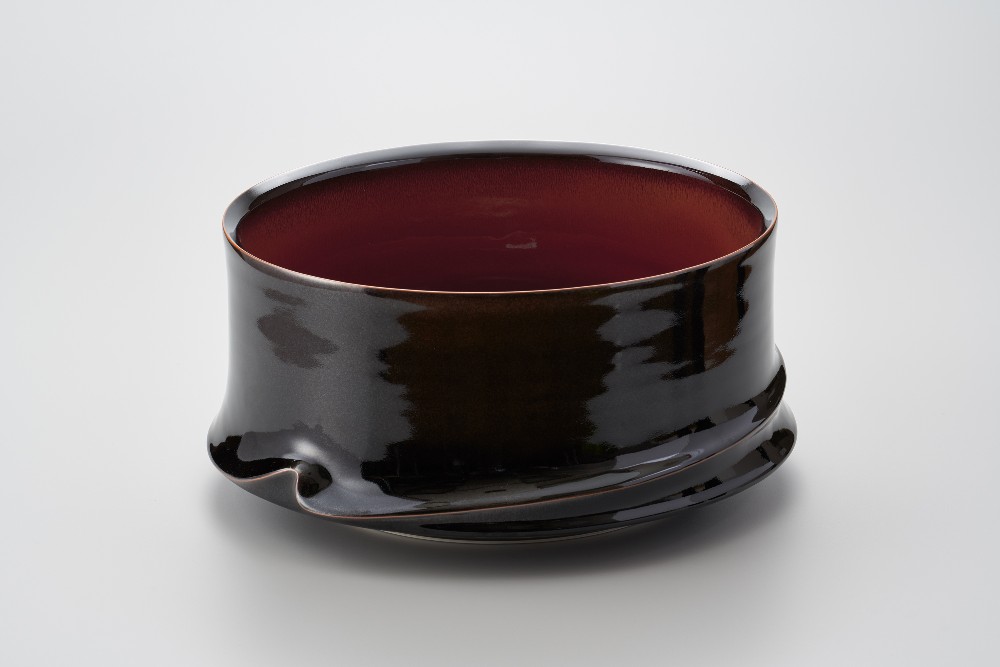 I created my work thinking of the subtle profoundness of the deep black and the deep charm competing with the red cinnabar. 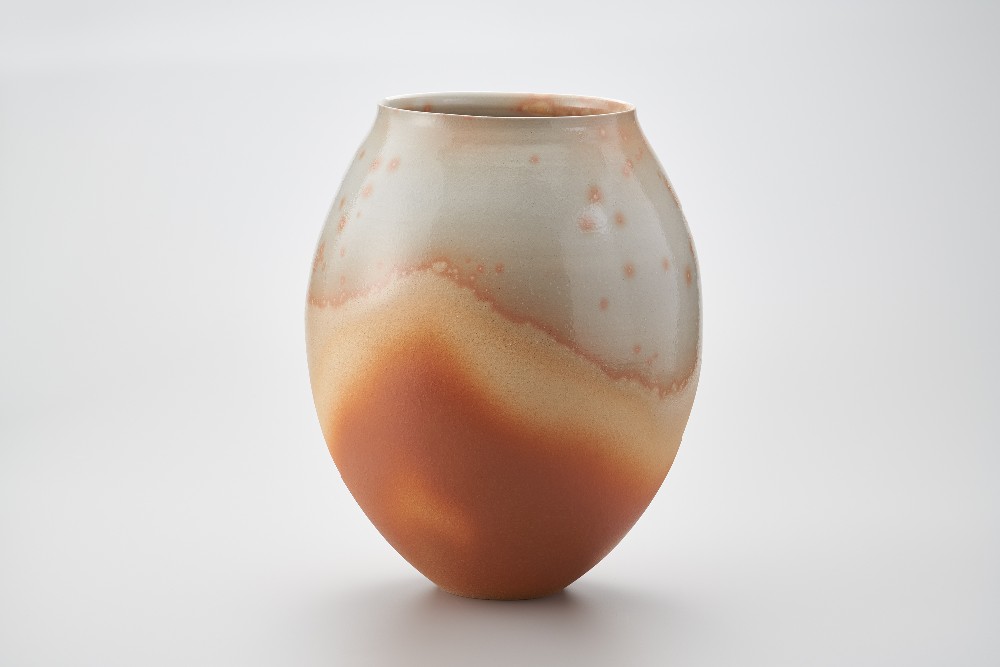 The soft taste of Hagi clay and the beauty of the color development of the frame work make the work look as if fireflies were whirling onto it and the viewer can make a refined admiration. 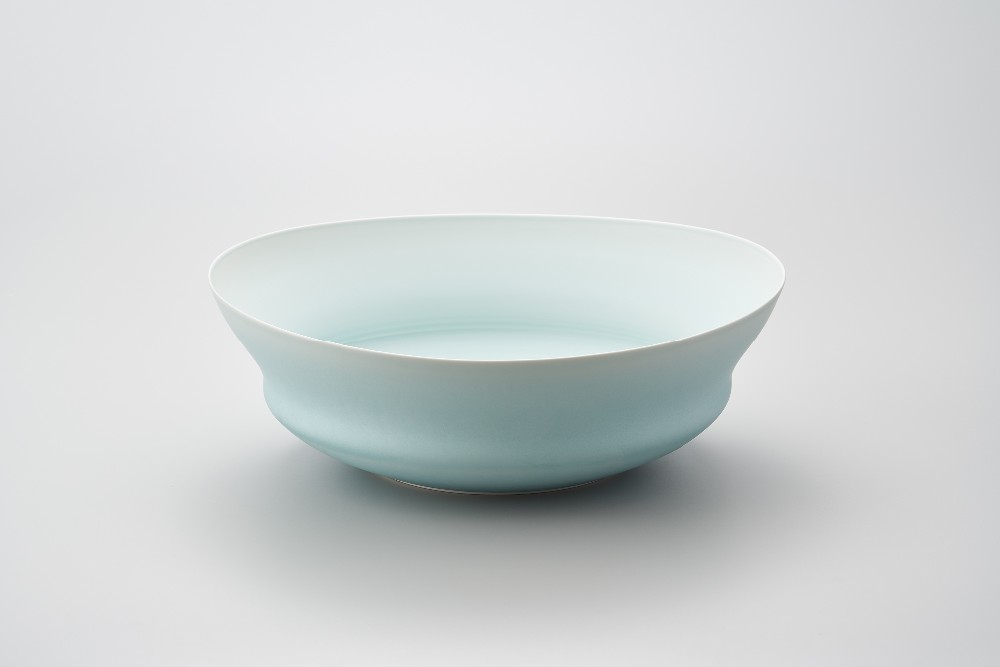 I expressed a serene pale blue color onto the glacier, which I have set as the motive of the work. The form is widening broadly right above the high ground part. The work changes at the drum section. I have finished the work by cutting the edge part into two parts making it have a soft motion. 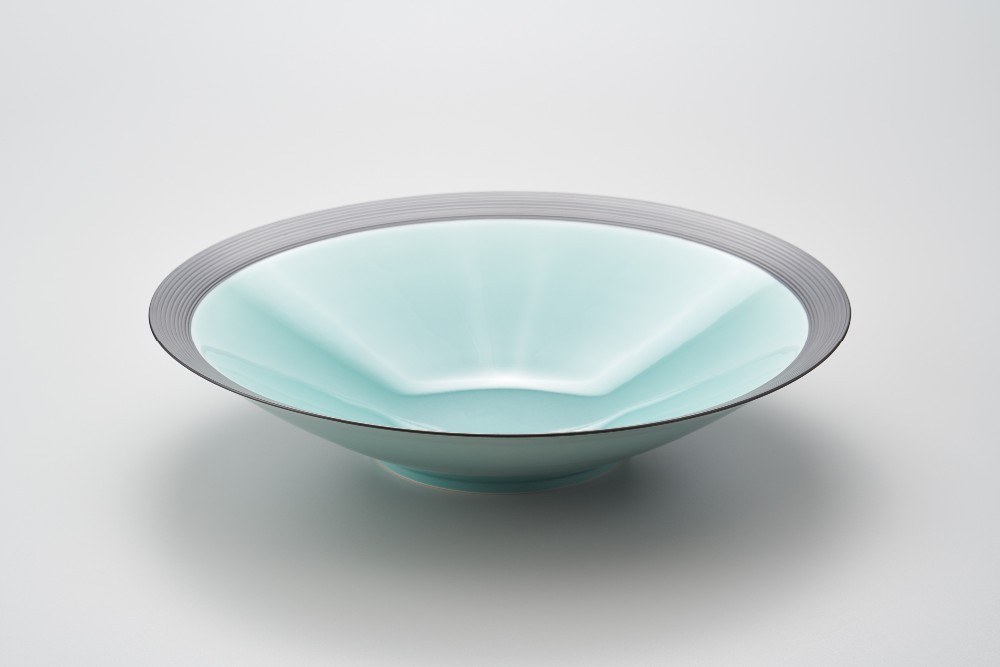 In order to set off the beauty of the celadon glaze, I put on a matted black onto green. I felt the harmony and the tense atmosphere of celadon and black which I have expressed by a simple flat bowl. 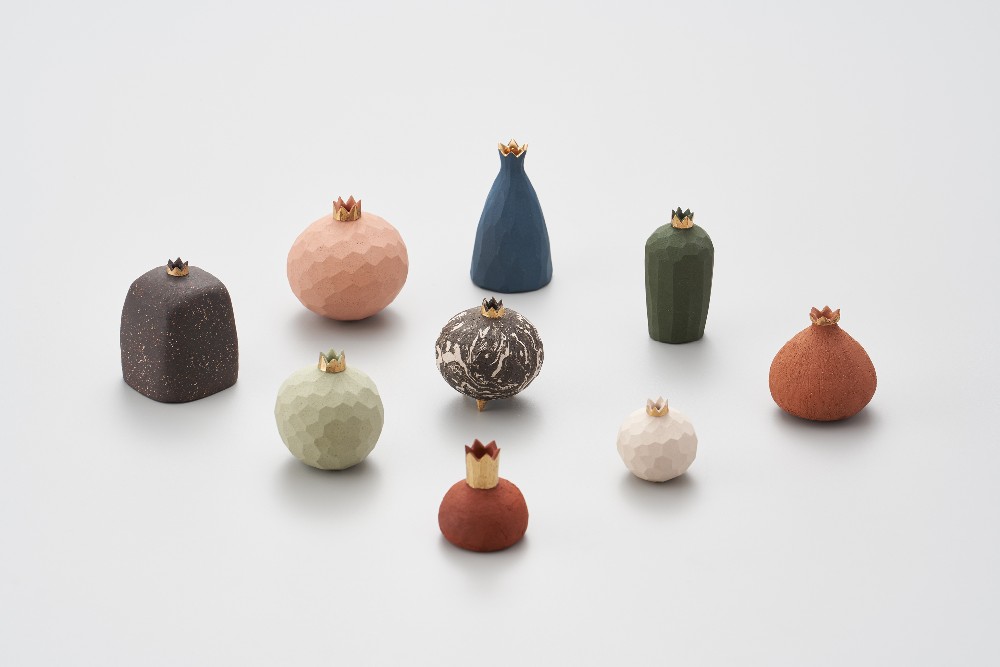 The pomegranates receiving the golden crowns were reflecting our shining and happy lives.

At the Art Crafts and Objects Division of the 115th Arita International Ceramics Competition, a total number of 127 applications have been sent in. Almost the same number of works could be collected as when the competition took place last time, and also its content was widely ranged. Just considering the award-winning works, these were widely ranging from porcelain and ceramics over vessels and objects to constructed works. Beyond the faction, various ways of creating works have all been collected in one hall, giving not only the creators but also the viewers a good opportunity to know the “contemporary art of pottery”.

The Work “Saitōhenko” by Shōji Ishihara, winning the highest award, the Minister of Education, Culture, Sports, Science and Technology Award, was showing a strong sense of existence out of a corner at the venue right after we entered the examination venue. By slightly trimming the lower part of the circular flat stoneware flask in an egg form, all molding factors such as the emphasized powerful form of the stretch of the upper part, the fearless geometric pattern having its origin in a pattern of lines and arcs, the texture with its restricted gloss while being an overglaze painted work and others are merged so that the work has a burly expression letting feel primitiveness as well as universality. The creator is 74 years old. This excellent work convinces that in pottery art, a generally advanced age does not bring disadvantages.

The work “Oroshi” by Satoshi Kino, winning the Governor of Saga Prefecture Award, was utilizing the beauty of a freshening blue white porcelain. The work puts an airy form into practice giving the impression of a blowing wind. The work has a strong frontality. The front side is thin and sharp and the edge of a surface being like a belt, the opposite site lets having a width and gives intonation and shade and shadow to the form. Another good point about the work is the form and its abounding changes which does not need to rely on a stand but it stands independently.

The work “SILENTE” by Leonardo Bartolini, winning the Mayor of Arita Town Award, means ‘quietness’ according to its title. By launching the swelling slabs on the edges, the flow of time is expressed by a quiet and rhythmical form. Also the terracotta colored tone looks so typically Italian.

This time, the examination was being held together with Toshio Ōhi, member of the Japan Fine Arts Exhibition (Nitten) and Tetsu Suzuki of the Japan Kōgei Association. At the examination itself, our views were mainly matching with each other’s opinion. Whatever direction a work was showing, at the examination, we could confirm the roots of fine arts that good works are good. 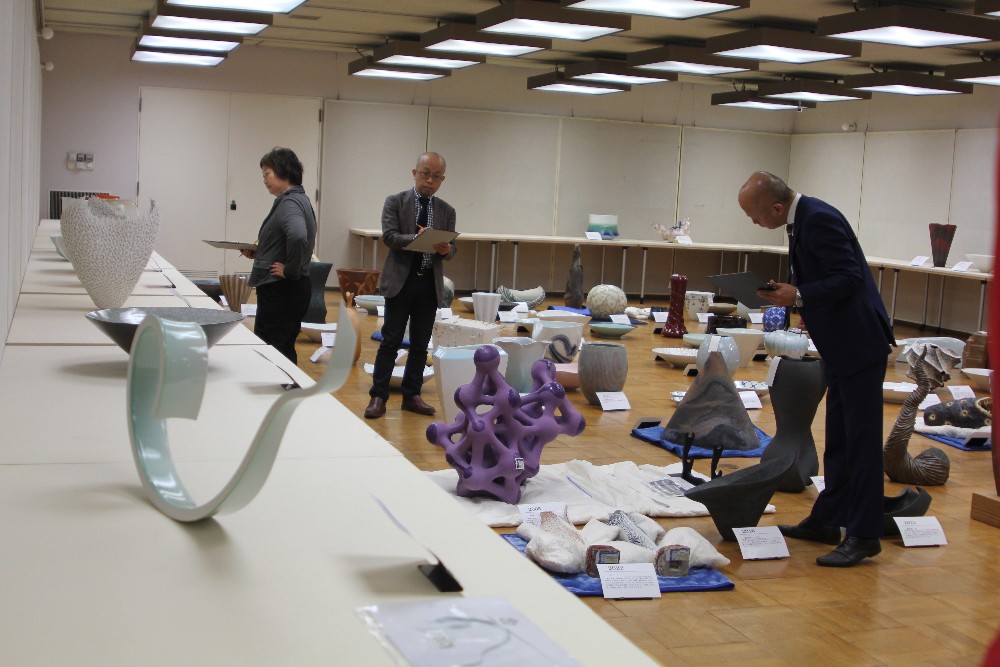