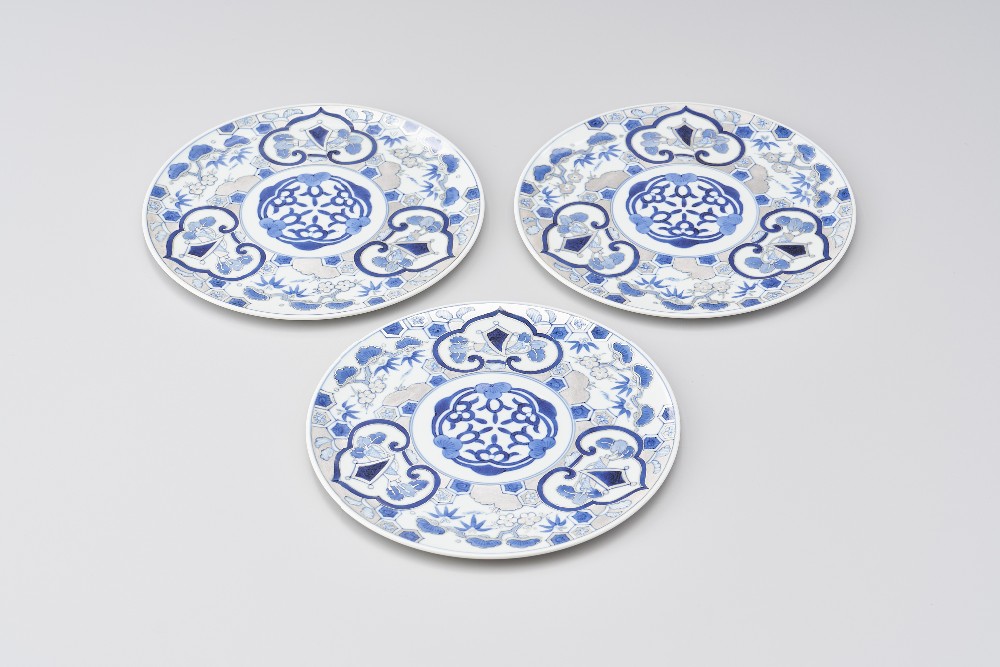 I have reconstructed the pattern of gilt decoration of Old Imari only using the two tones of Sometsuke (blue and white pottery) and silver colour. It has soft blue and white colors and glaze skin like Early Imari and the congeniality of the silver color which is not too gorgeous is pre-eminent. Flat plates are not the standard in Japanese tableware, but in order to enjoy the gap between “classic” and “modern”, I dared to design them in a western form. It is a vessel that was born just for the reason that nowadays, Japanese and Western lifestyles are borderless. 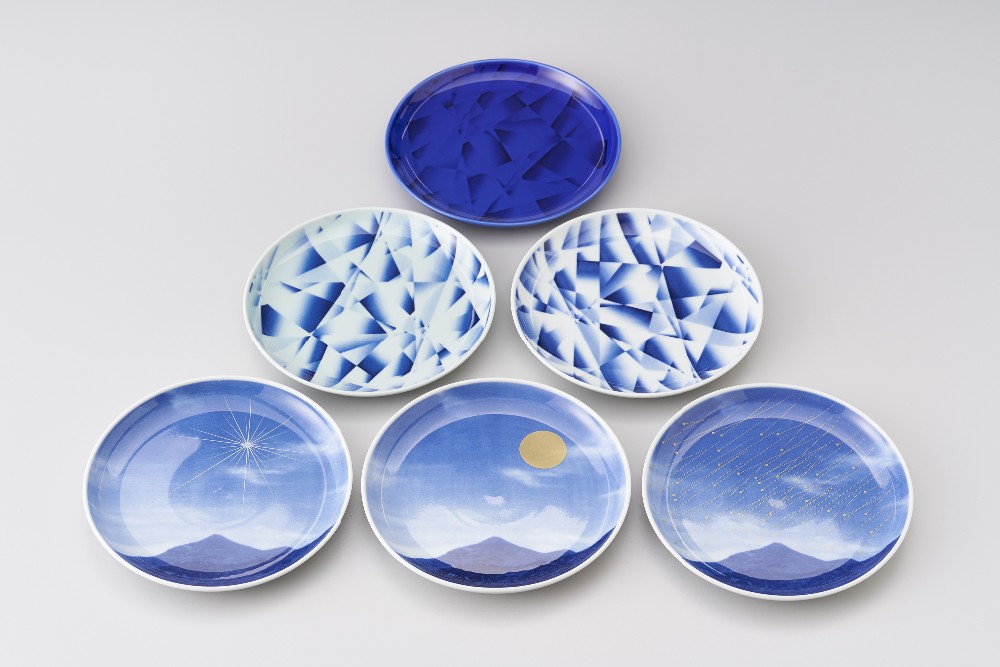 I made traditional paints and zaffre as the basic elements and expressed the Infinity series with a graphic that cannot be expressed through hand-painting. I have put a “gradation” with different glazes (white, blue and white, lapis lazuli) on a graphic with a gradation letting imagine a diamond. These plates decorating the table with enriching expressions can also be used as vessels to give good hospitality to guests. It is a “picture”, whose graphic is based on real existing landscape photography of Arita on which decalcomania paper with a “Moon”, “Star” and “Meteor” is laid over and the pattern is being put onto it. The plates can of course be used as tableware, but they are also recommendable for the interior as ornamental plates.

I was focusing on the traditional technique of “tobikanna” (a pottery tool) and by continuing to rotate it, small “kanname” (a design occurring through shaping the vessel by using the tobikanna) turned into a big wave pattern, which put a soft expression onto the porcelain. By collecting the paints in the center of the work, I portrayed a black hole that lets imagine the paints get absorbed.

I painted a moment of nature on a bowl that is convenient to use and can be used diversely. I painted how a thrush picks up the fruits of a cornus florida in changing pictures. 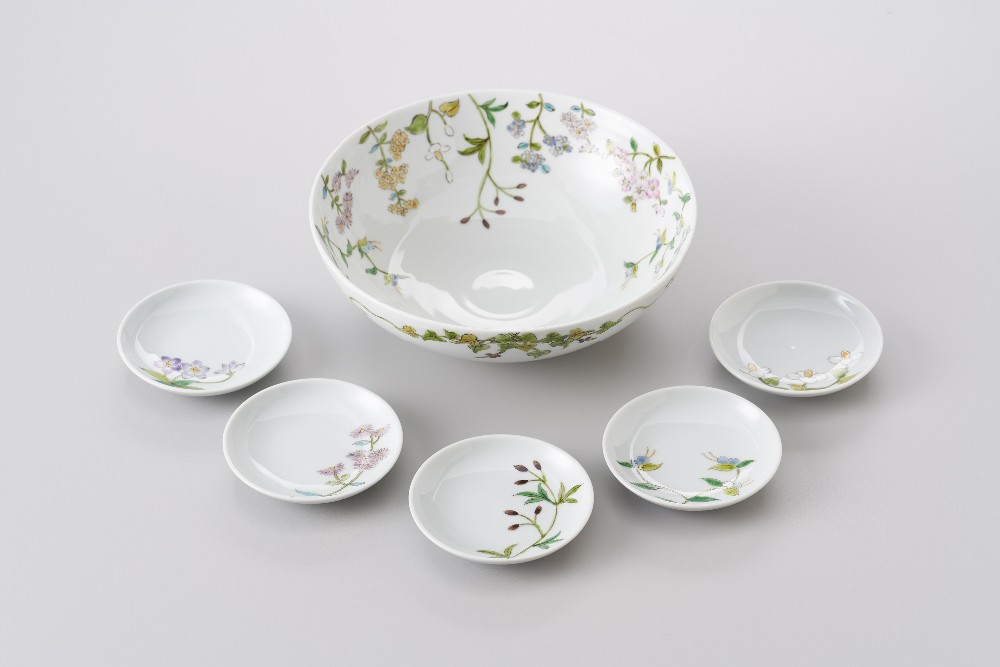 Within Aka-etsuke, the red iron overglaze pictures, I created a work not using red but soft colors. I devised the paints and the firing temperatures and thought that I want to have pale colors shining within the form. Within the division of labor concerning Arita porcelain, I am thankful that I have encountered Aka-e and which I would like to continue painting also from now on.

I felt the beauty of the cooked food on the plates at the time I created them. This bowl group can be used diversely to put salad, boiled dishes, pasta and in the season from now on chilled Chinese noodles on the bowls.

I was imagining the node of a bamboo. The abyss is expressing the roundness of a bamboo, overlapping and easy to pull out. The engraving of the bamboo gives a feeling of deepness and by using the flow of celadon, the taste of the strength and weakness of colors can be seen. After firing, in order to express depth, I put a blast onto it, showing a moist feeling. It expresses a feeling of smoothness, also in the rough inside of the work.

I wanted to draw a picture that has never been drawn onto Arita porcelain before, so I chose “pop” as the theme, and by putting further woven patterns onto the work, I felt tradition and drew the work as a new blue and white piece of porcelain. Apart from the pattern, I was drawing Seikaiha, traditional wave patterns, in a way that lets imagine guessed bubbles are popping. It would be a great pleasure if you could view this new and individual Arita porcelain. 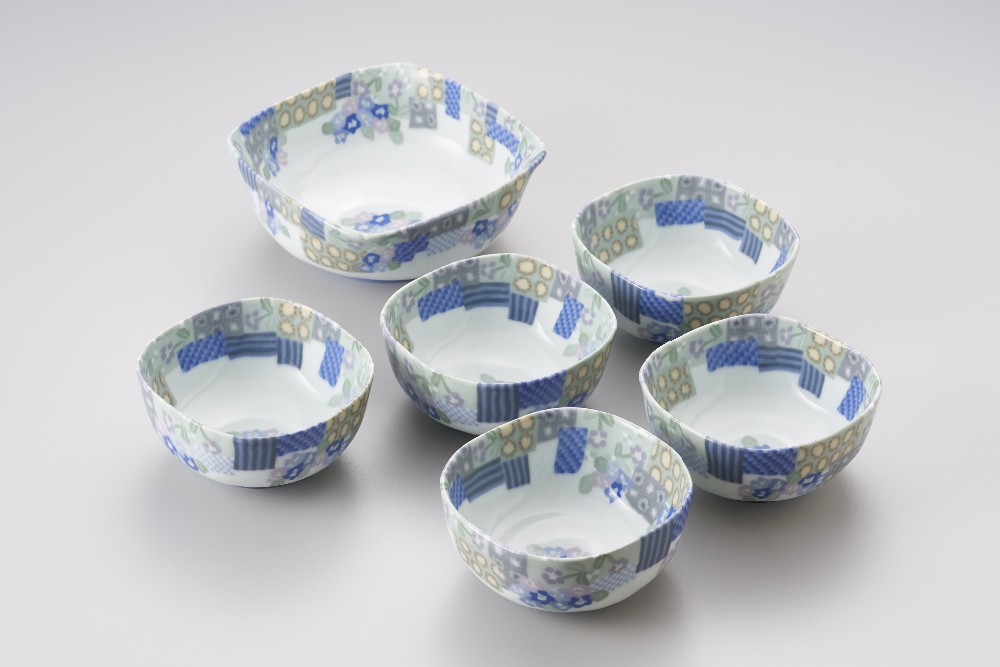 This work is expressed by using the traditional deliberated technique. In a funny way, I expressed various patterns locked up in one vessel. I painted the patterns on the edge. The bowls can be used easily as serving bowls. Moreover, with the interest of moderate squared bowls, I want to raise the feeling of their users. 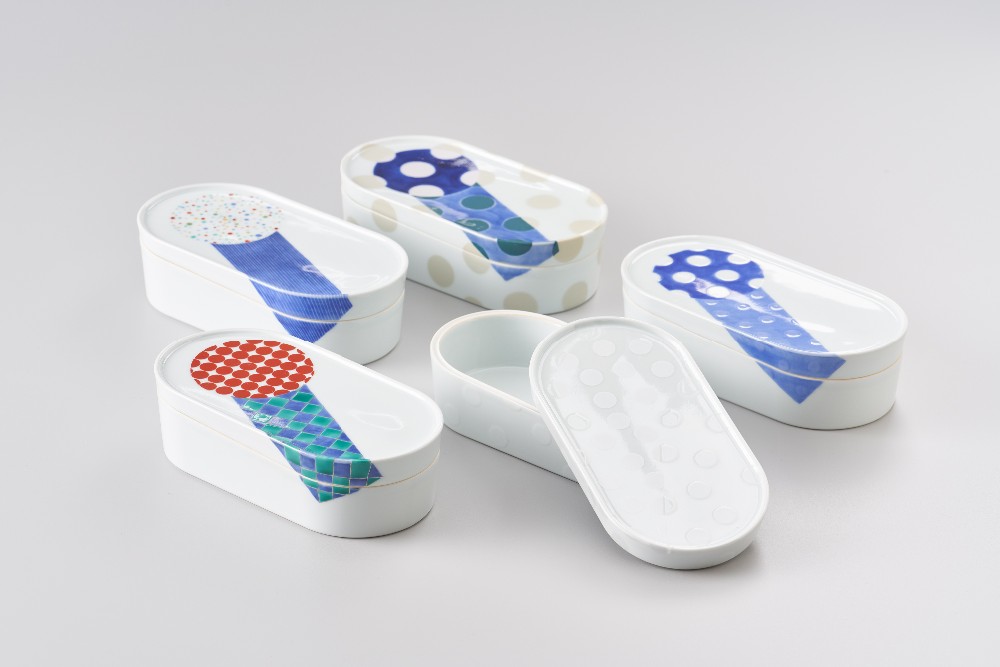 Many wonderful traditional crafts and traditional industries are left in Japan. But on the other hand, a problem that the producing centers are carrying is the big subject of the inheritance of techniques. Craftsman are those who support this subject and therefore, also new techniques arise. While the present work is a difficult lidded pottery, its form is produced using CAD data that become more and more established. It is produced by the craftsmen of Tokkō-gama kiln. Please use this work as your personal treasure chest that was produced by the wonderful inherited handmade technique of the craftsmen of Tokkō-gama kiln and painted by the sensibility of the traditional craftswoman Mrs. Miwako Murakami. 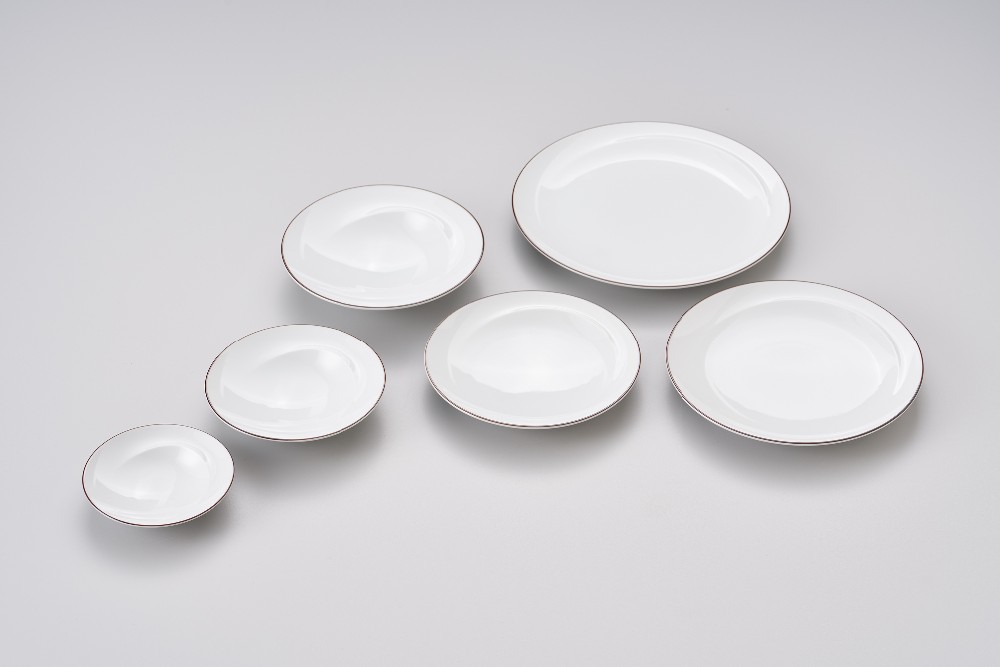 I imagined the softness and sharpness that Arita’s white porcelain has. By caving in the back side of the relief, the plates can be stapled in a way one can carry them easily and they also get into a good shape. These simple vessels let cooked dishes look better. (Can be cleaned in a dishwashing machine) 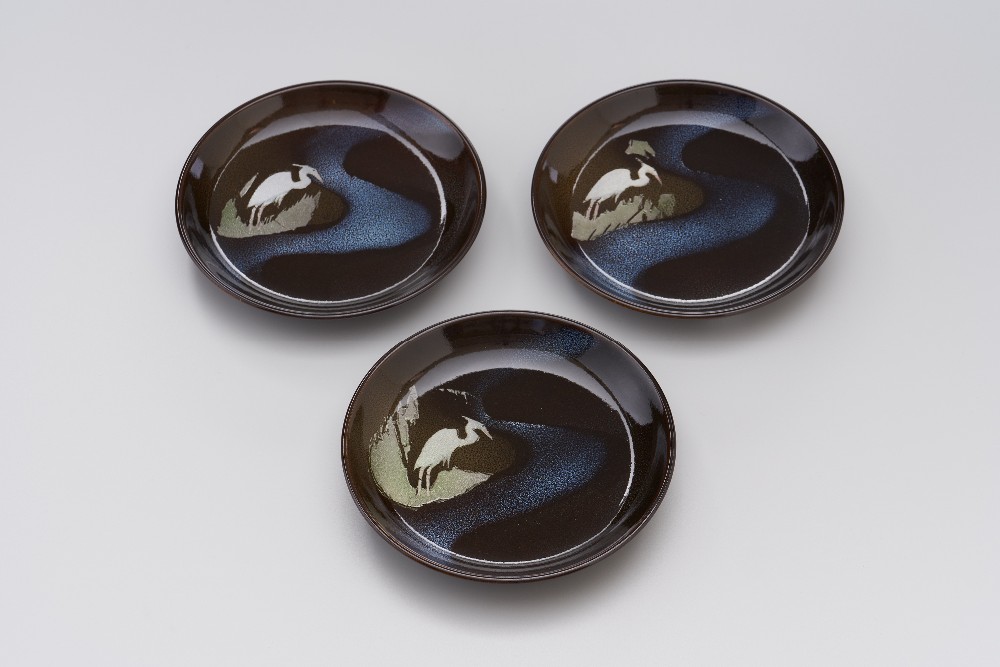 For this work, I have purchased biscuit fired porcelain texture. I fired it at 1240°C , and after painting, I fired it again at 1210°C. I expressed how a heron is aiming a fish at a river. I struggled a lot to express a river by putting glaze on the black plates. 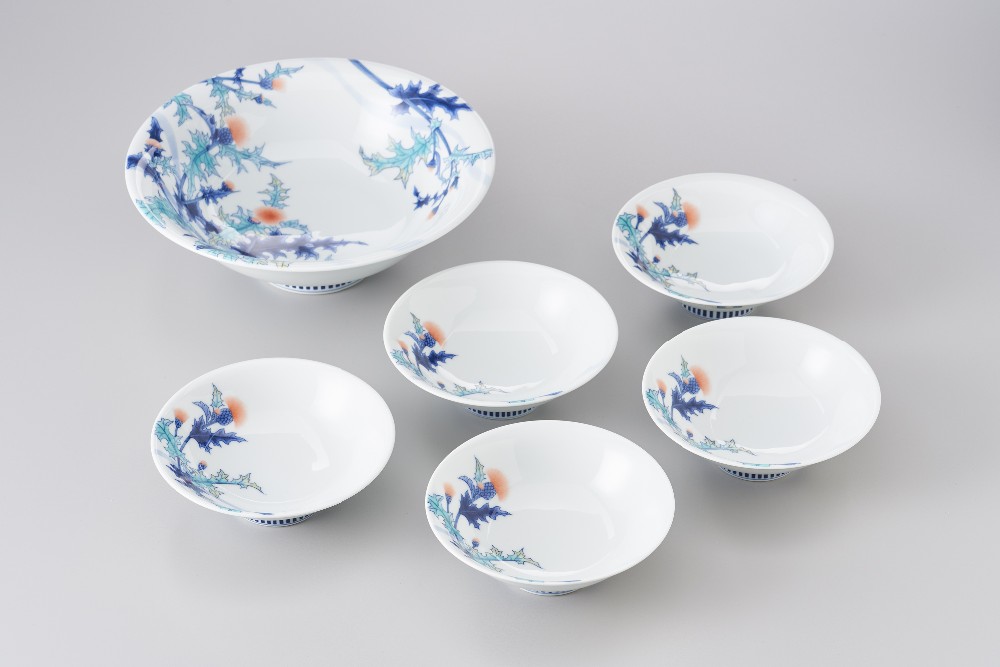 I tried to paint Japanese thistles that are fluttering in the wind of the early summer on shallow salad bowls. I expressed the softness and kindness of the flower, but also the roughness and strength of the leaves. 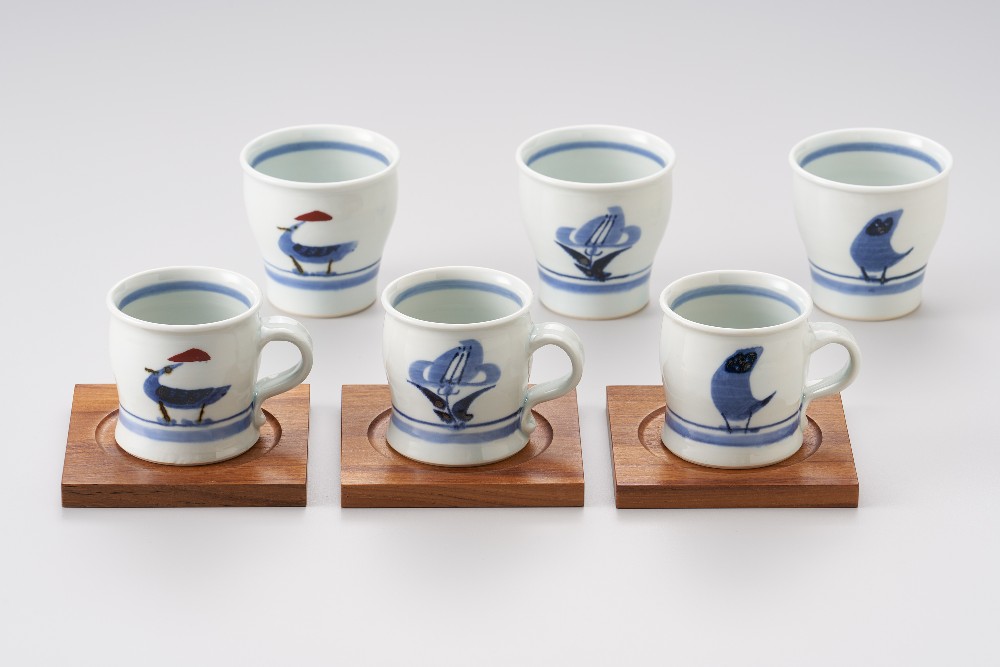 These work shows mug cups with just the right size for your hands as well as cups that can be used variously. The design is showing a chicken, an owl and a flower. The vessels were formed using the potter’s wheel and for the mug cups and handles, I put water on a European-style clay string and made the work. 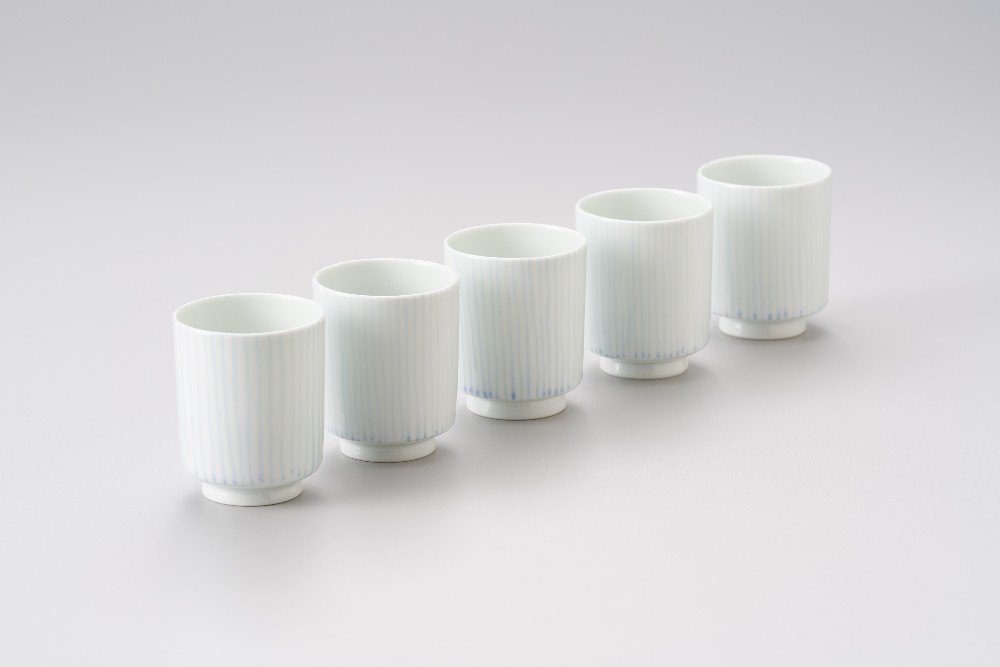 These are cups that have been formed by the traditional potter’s wheel that was passed along in Arita. In recent times, many vessels are created by forms or machine potter’s wheels. That is why I have created this handmade work that has warmth using the potter’s wheel. There is a soft feeling when you take the cups in your hands. There is not too much painting on the works. When creating these cups, I was hoping that they make the everyday life of their users warmly. 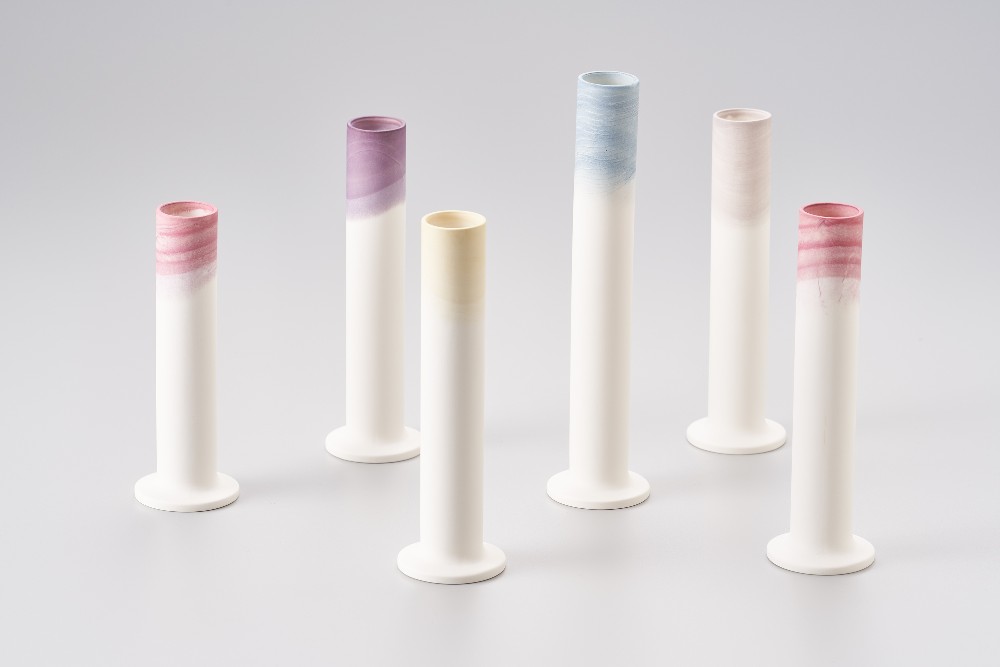 I used a special kind of porcelain clay and put on a dyeing by a plant which cannot be achieved onto ordinary porcelain. Through the richness of colors that plants have and the subtle extent of blobbing, each expression differs from each other. This is a beauty of nature that human work is not able to reach. For KUSAKI, I used a plant that has been used for dyeing plants since a long time ago. The colors of the natural plants are “Logwood”, “Myrica”, “Rhus Chinensis”, “Indigo” and “Sappanwod”. 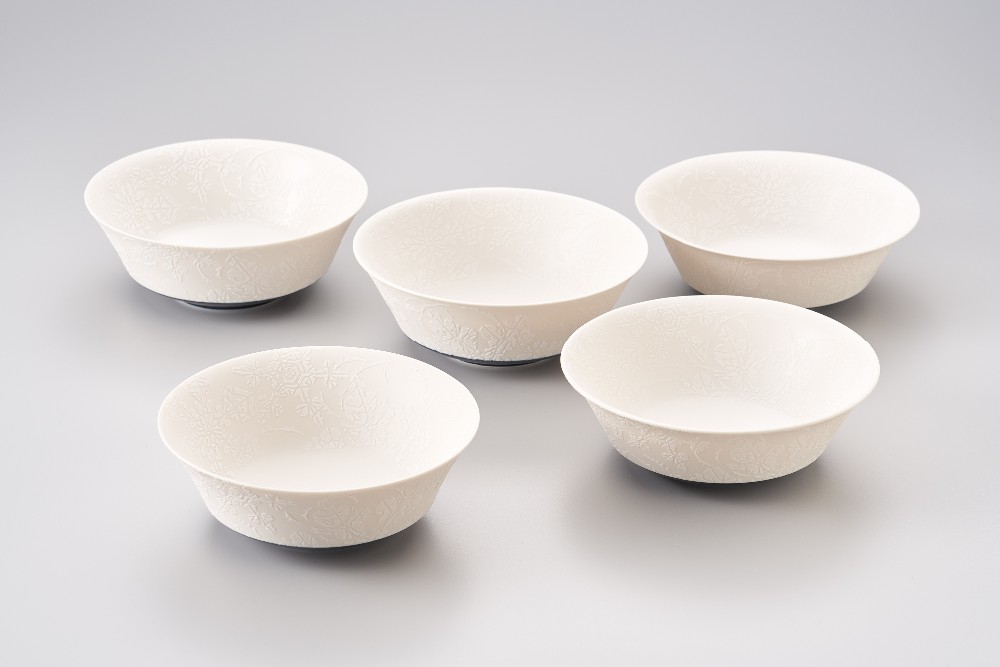 I used pattern paper and put makeup on the work. The beauty when taking off the pattern paper and the feeling of silence coming up because of the colorlessness and the sharp cold sense are completely letting imagine snow crystals. In order to let this imagine, I have created this work.

When I was looking at the group of exhibits at the examination venue, I felt that thanks to the history of steady efforts and persistence of all people that are related to the porcelain industry in Arita, this honourable competition could be continued to be carried out since 1896 for now longer than 100 years, although it was forced to pause for reasons of war. While the ceramics industry presently is facing a very tough situation, especially all the works from Arita at the venue were full of great technique, ingenuity and were vigorously and worth seeing. I feel that the 400th anniversary project of Arita porcelain that began in 2016 might have had a huge influence on these works. The share of information between potters and the exchange between technicians that did not exist before as well as the exchange of opinions between creators and sellers and the problems that both sides are facing, even though they do not find a conclusion, make me feel that the communication which both sides recognize as being mutual problems has a good effect on the industry in Arita.

Regarding those works that won a prize at this time’s exhibition, I strongly felt the respect and the recurrence of the younger exhibitors towards tradition and history. A challenge to new material and technique from the exhibits of the experienced exhibitors could also be felt a lot. It could also be guessed that an exchange across generations and studying is being carried out more prosperously which I was glad about. I am assured that their flow does not stop and will advance more and more.

From now on, the “arita huis” that has opened recently within the Arita Wholesale Area will be used as a base where an exchange of opinion will be actively carried out and in which the exchange of domestic and foreign artists and designers is going to increase. Even if artists do not go abroad into the world, aiming a producing center with the fascination in which the world comes inside is also one method that lets this Arita International Ceramics Competition develop more. 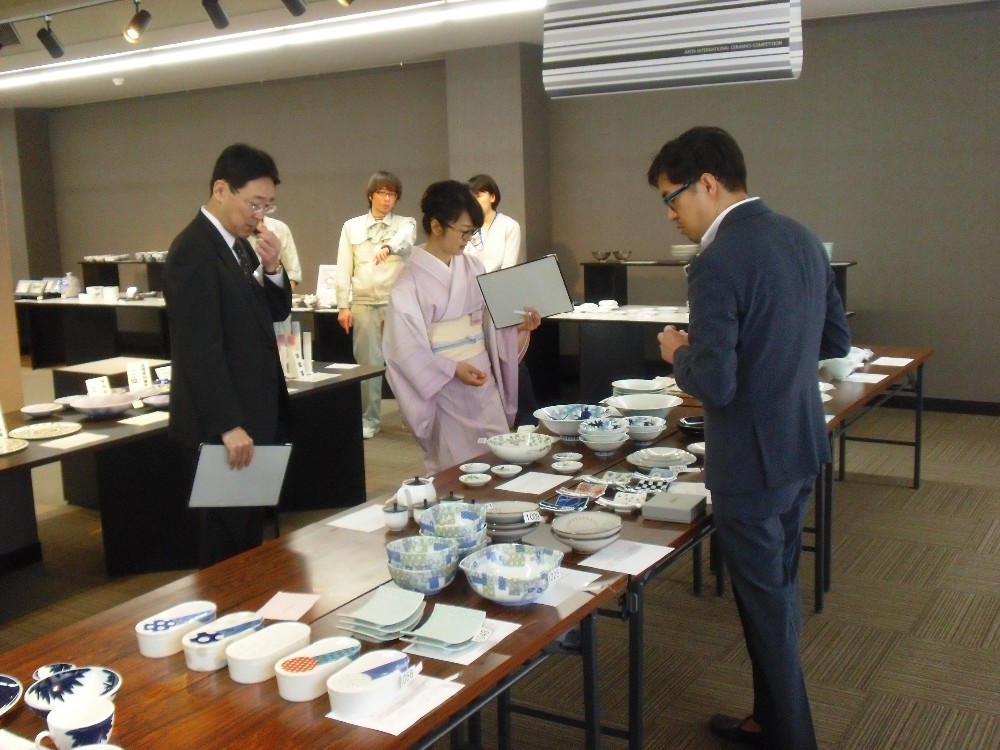