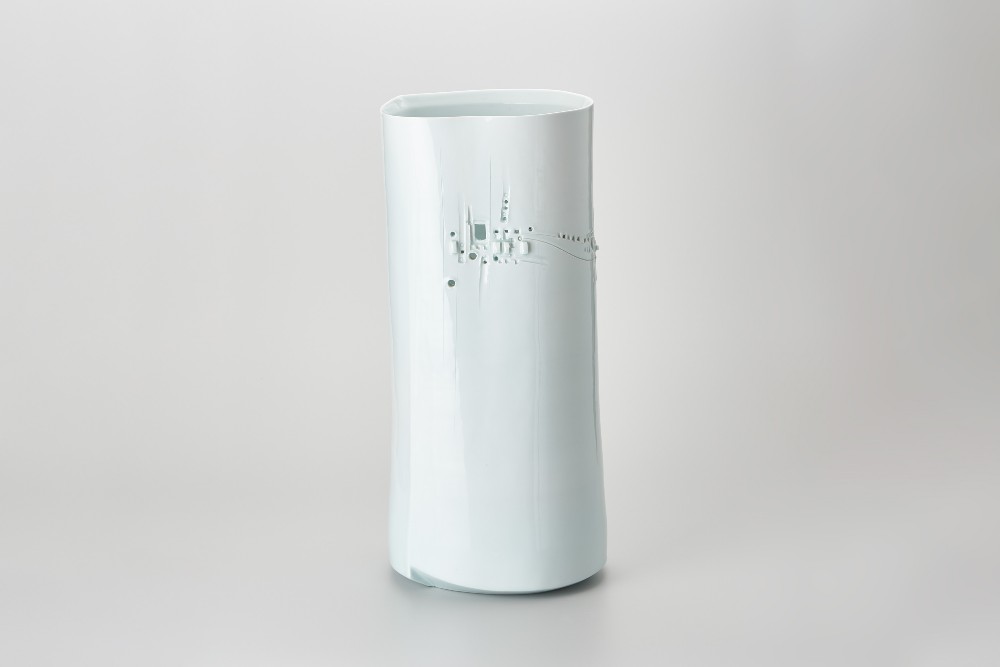 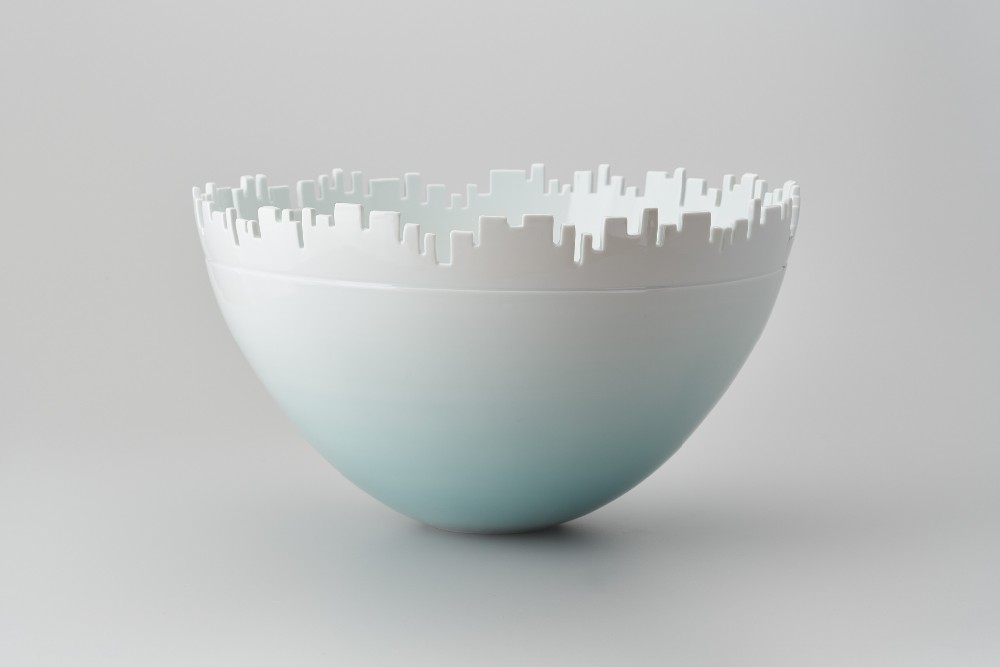 Ice drifted in the sea, and a small ice drift expressed the form that was seen as a large form like a 〔heat haze〕. 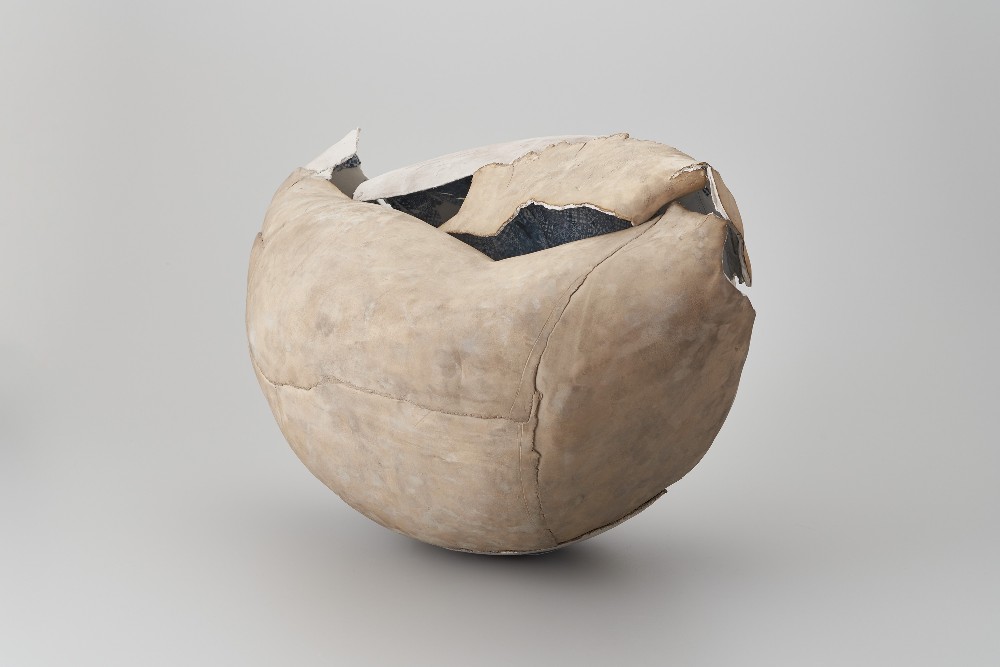 This is a porcelain piece over glazed with silver. This work is the result of my artistic development in Japan during a few months. The form and theme arise from my contact with traditional Japanese techniques and practices in ceramics. My former education and artistic experience in combination with newly acquired skills and techniques during my specialisation in Japan have made it possible for me to use this differences as an advantage in developing my artistic expression.

The other side of the rain II (Shinobu Tanaka), Saga Prefecture 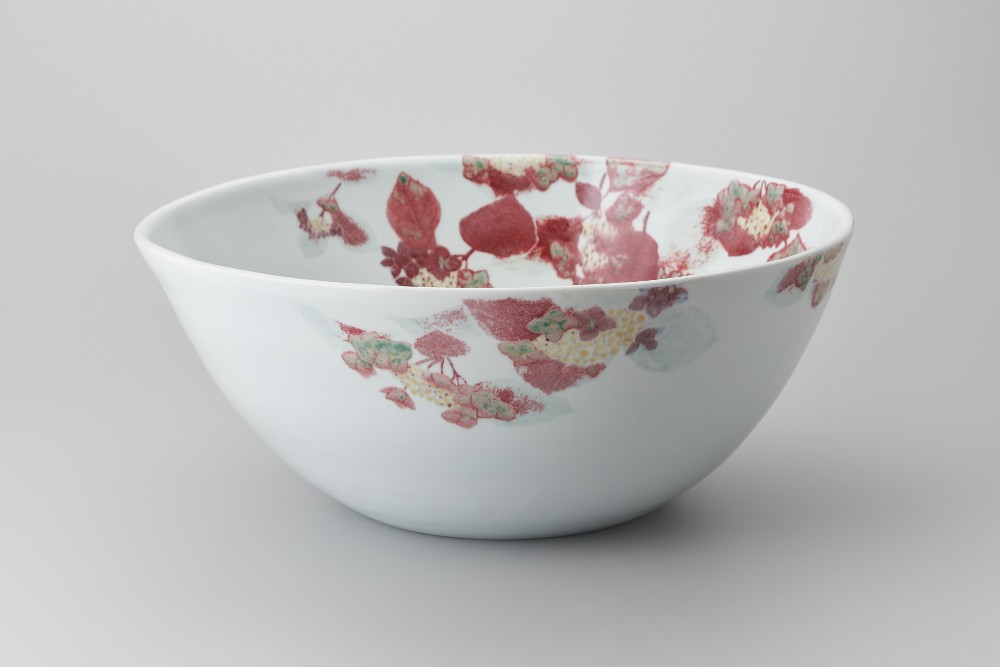 This piece of art was created using the beauty and vibe of a hydrangea blooming in the rain as a motif. 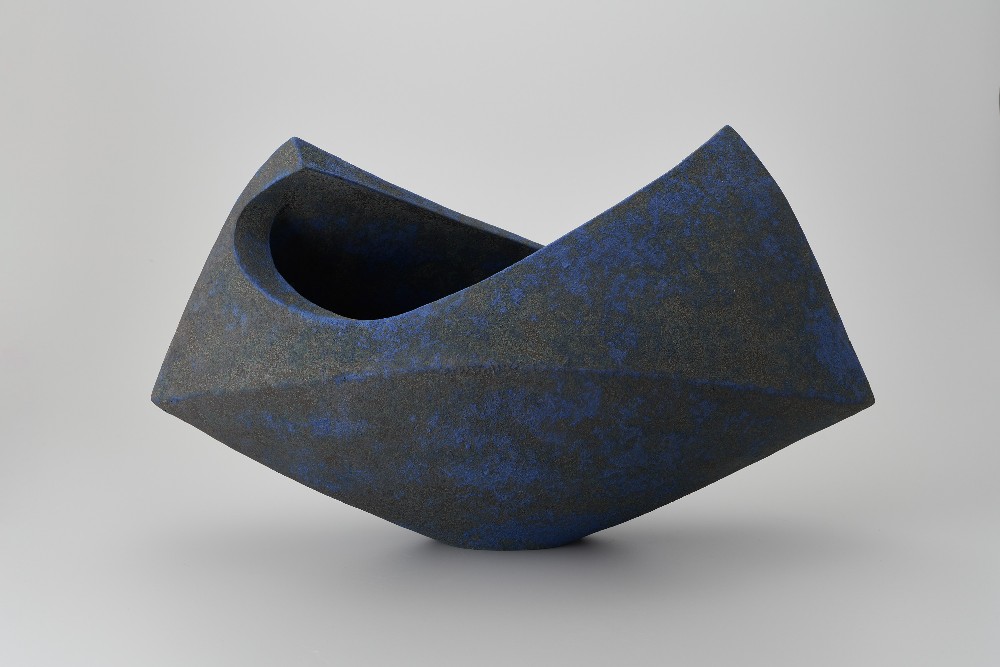 Painting several layers of Japan`s ancient color indigo blue as over-glaze produces a strong feel of the material. By putting these layers of over-glaze on top of each other, the range and strength of the color blue add depth to this piece of art.
Formed while keeping in mind that while the profoundness achieved by putting on indigo blue makes half of it, the shape shall lightly come lose. 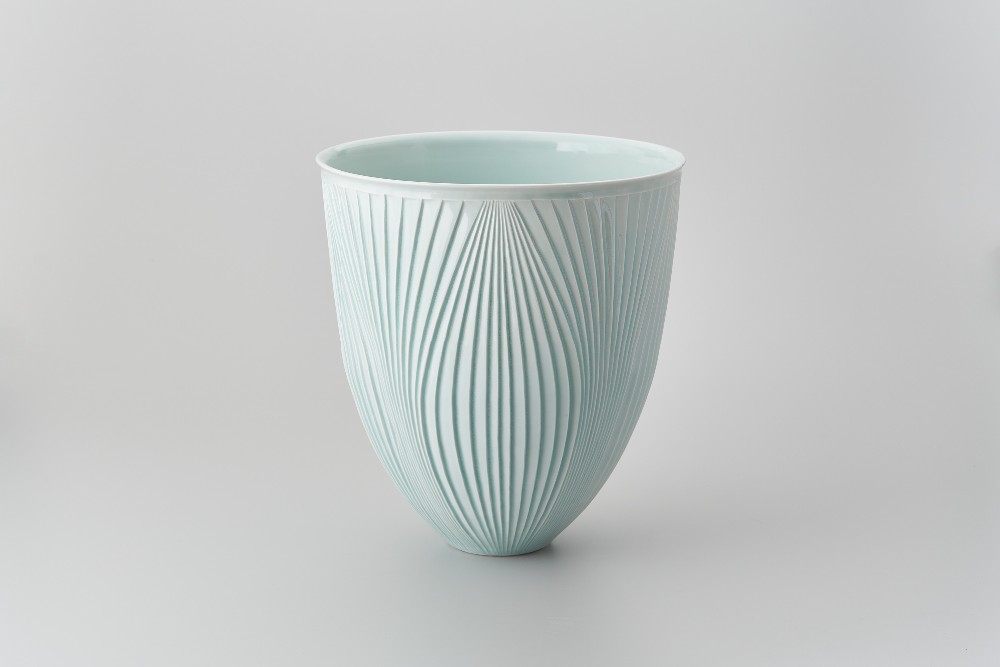 Bearing in mind that the motto of porcelain making is an atmosphere of grace and dignity. The process of building a sculpture does not allow failure and there is a high risk of cracks occurring when firing pottery. 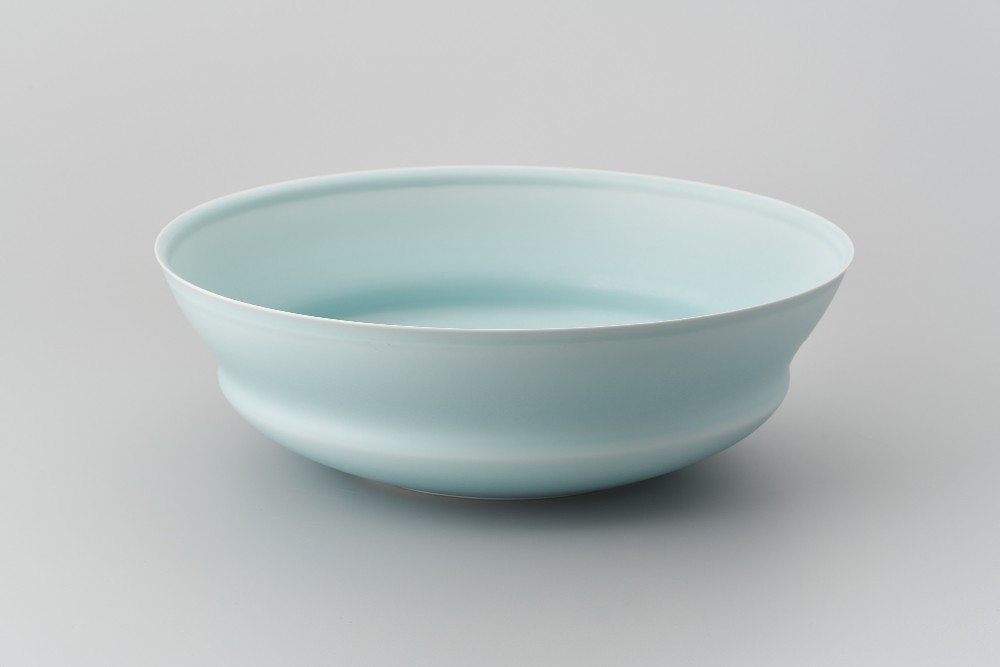 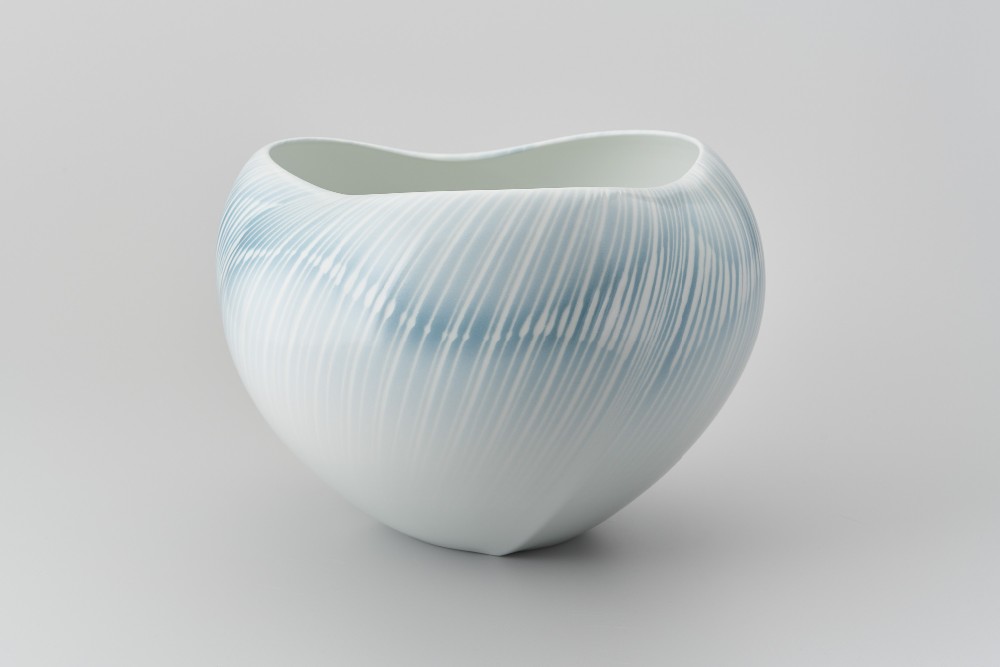 Starting to move by the transformation of the small offering stand, applying inlay techniques and the gradation of Gosu, this piece of art expresses an imagined landscape. 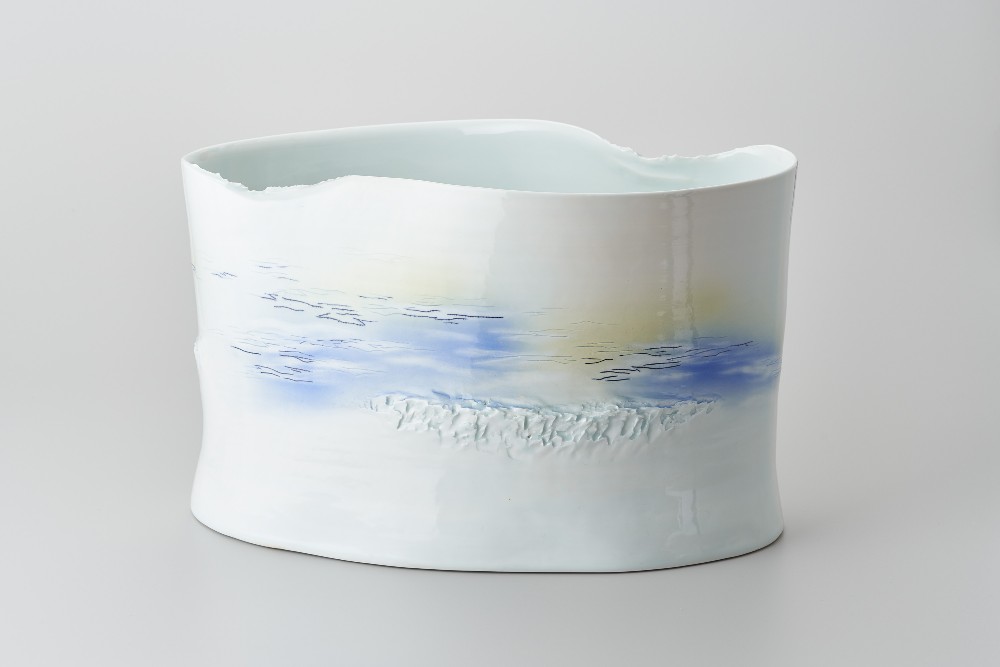 Imagining the brightness of a snow field, a far and distant imagined landscape is expressed inside white porcelain. 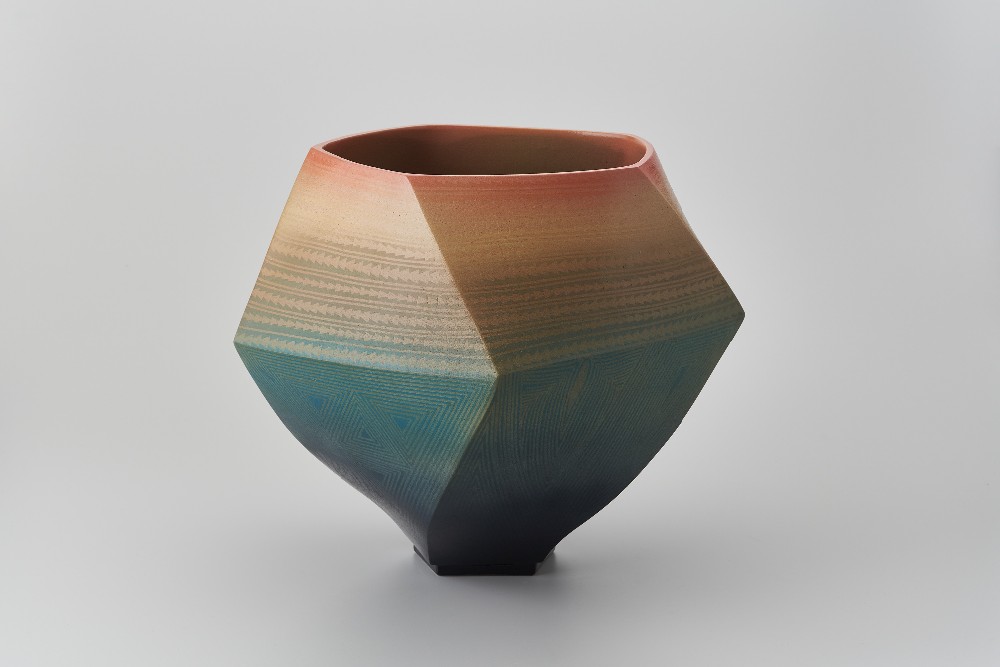 A shape symbolizing the instability of the weather in the early spring, modelled in this asymmetric object. Expressing the change of temperature and scenery using the gradation of colors inside this striped pattern with the cooler status in the lower part and warmer situations in the upper part. The arrows in the upper part are an imagination of a spring breeze. 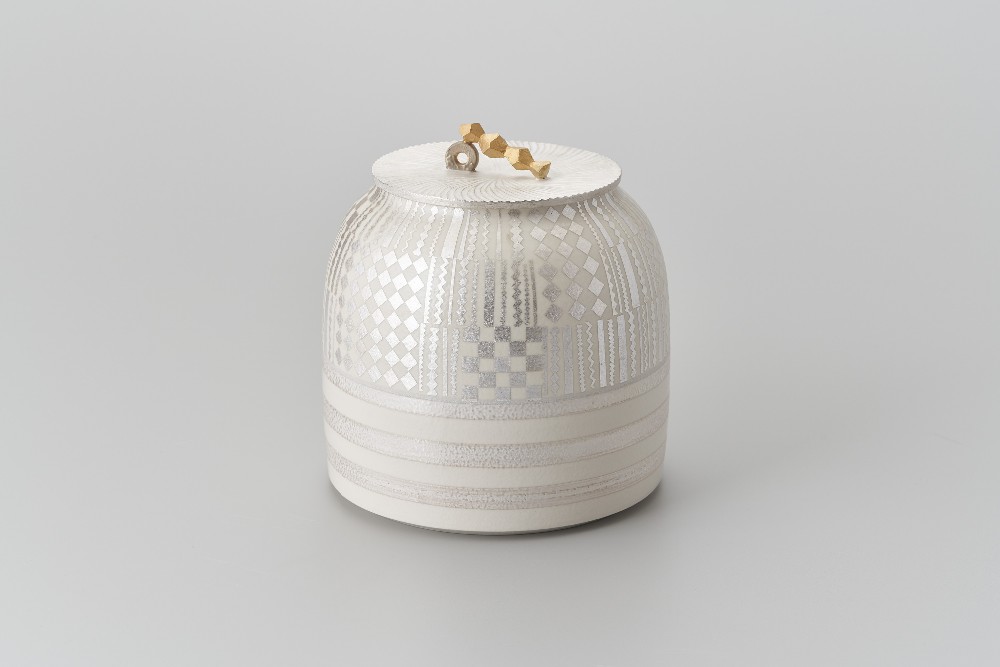 Manufactured imagining the white brightness of a harvest moon. Besides [obstruction] and [interception], the [Sai] in Saiki also means [rise] and [overflow]. The wish that the moonlight might overflow all around from this lidded pottery was included and expressed through the shape and the use of silver colors. 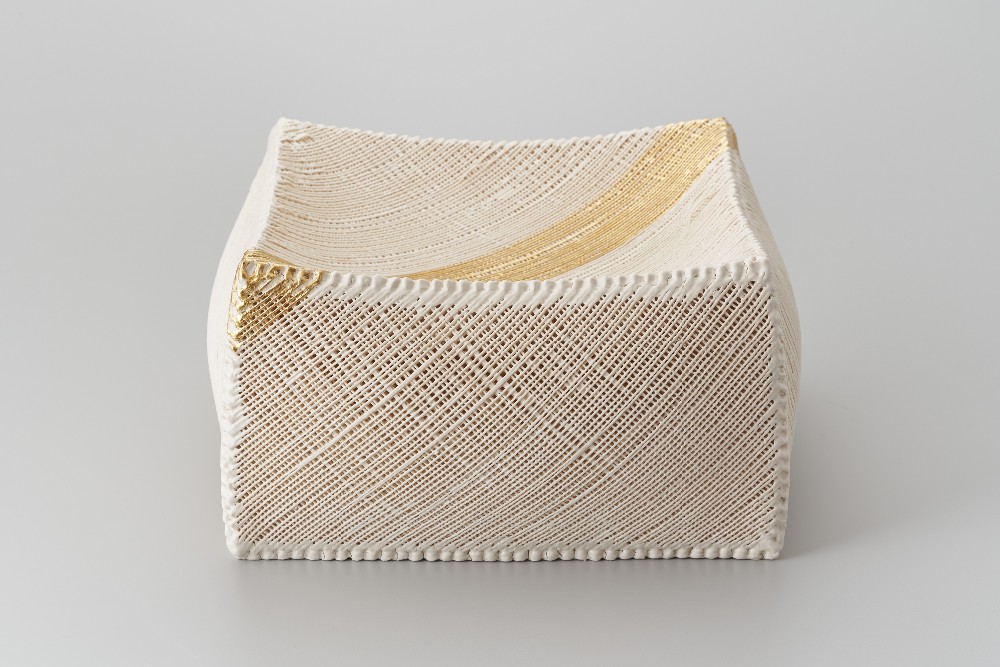 Several layers of cotton thread with Sichuan pepper on it piled up causing the inflated shape with all sides sewed together with a mud-stained thread. Putting emphasis on the beauty of the change in its shape caused by the firing process and atmosphere, this is an expression of the airspace composition interweaved in earth and thread. 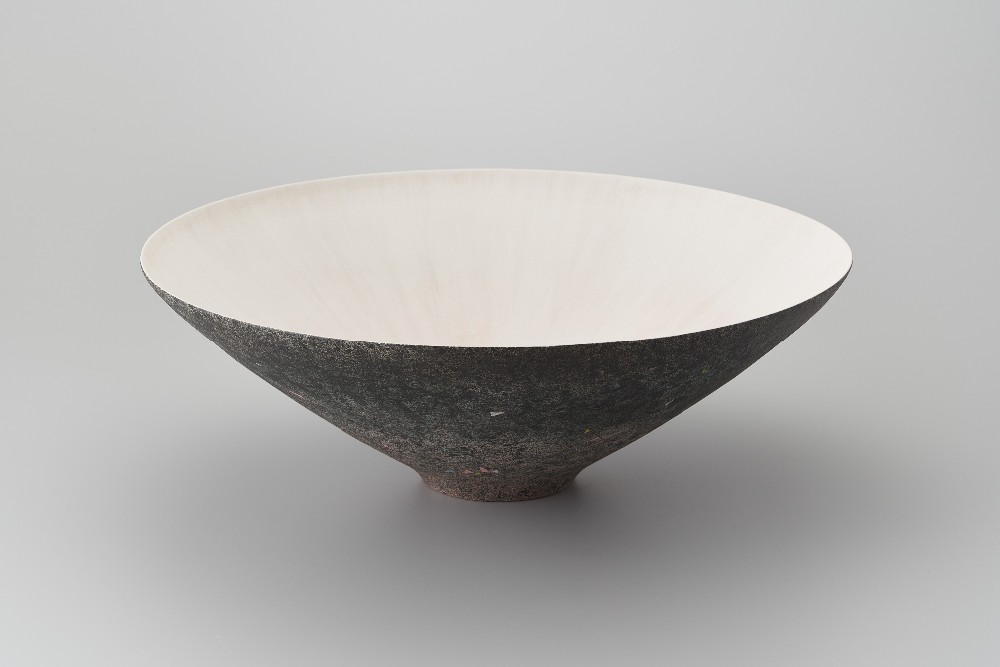 An imagination of the harmonic and magical world of a gentle light concealed by deep darkness. Several layers of a pale color tone of cosmetic soil are accumulated on the inside expressing a soft light through brushing. 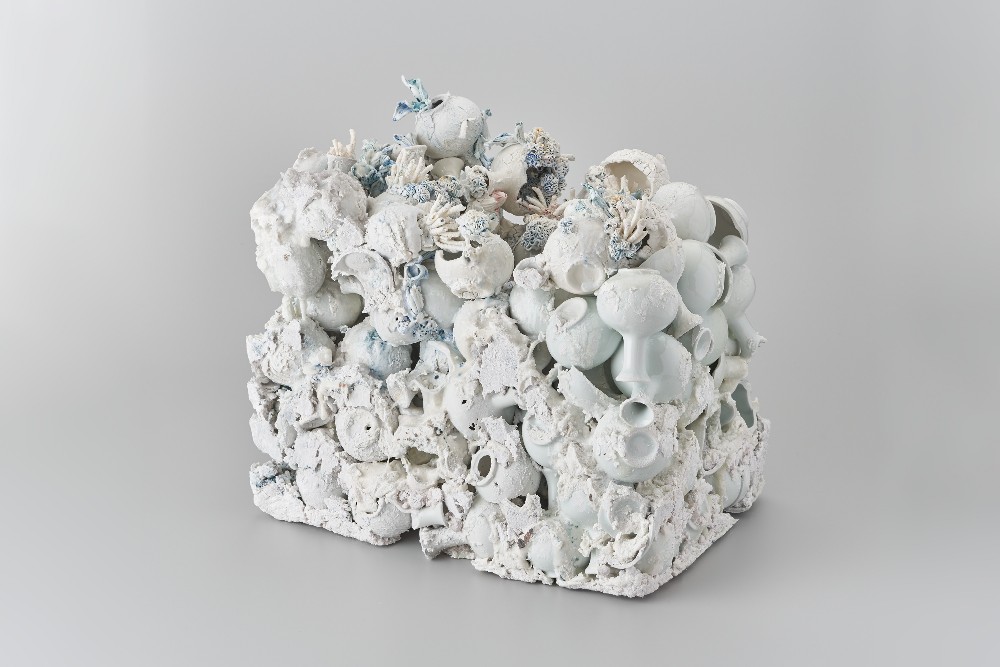 Failed pieces of art in the ceramic business are thrown away and buried. As time goes on, they connect to the vast land and similar to fossils of plants, the physical body turns into minerals and crystal, breaking the silent image of a stone.

I was honored to participate in the 116th event of the traditional Arita International Ceramics Competition. First of all, I would like to express my respect towards the efforts and hard work of all persons involved. I believe that this exhibition shall be highly memorable also because it was held in perfect timing with the change of the era from [Heisei] to [Reiwa].

The three judges this year were Michio Kanō, Norio Kamiya and Kazunobu Nakanodō. The process of choosing the results was conducted by the judges giving each piece of art a [pass] or [fail], marking all the objects that had passed. With 109 entries this year there was slight decline in the number of objects compared to the 127 entries last year. However, the quality of the objects did by no means fall short. Recently there are objects with no apparent crude devising at open exhibitions everywhere but here, the entries kept high technological standards. Nevertheless, it was the mutual opinion of the judges that in comparison to the high technological quality, it would have been pleasant to see inventiveness on how to specifically use this quality.

The scale of Mr. Shimada`s cylinder-shaped piece of art that was composed combining several techniques stood out at the venue. This technique free of failure with ornaments placed at perfect spots is a true sight. Mr. Ueki`s work shows high creativity adding blue and white over-glaze beauty and a transfiguration of the vessel`s rim to skills at the potter`s wheel. Mrs. Cavorovic`s work is also big-scaled but the soft texture of the vessel`s surface and the application of a Japanese style pattern on the inner side of the interstice is a fascinating conception. It was a surprise that there were only few submissions of porcelain with overglaze enamels from Arita, the genuine place for overglaze but among those Mr. Tanaka`s hydrangea paintings skillful arrangement due to the copper thread glaze got ahead of the group. It represents a part of the pride of the overglaze enamel`s home base. Last but not least, the Nikkan Kōgyō Shinbun Award winner [Ginsaisaiki Hakugetsu] by Mrs. Tomoko Takahashi and Nihon Keizai Shinbun Award winner [Jūkaku] by Mrs. Michiko Takada were relatively small items but very impressive due to the demonstration of overglaze methods using unique techniques and ladylike delicateness among the highly refined objects. 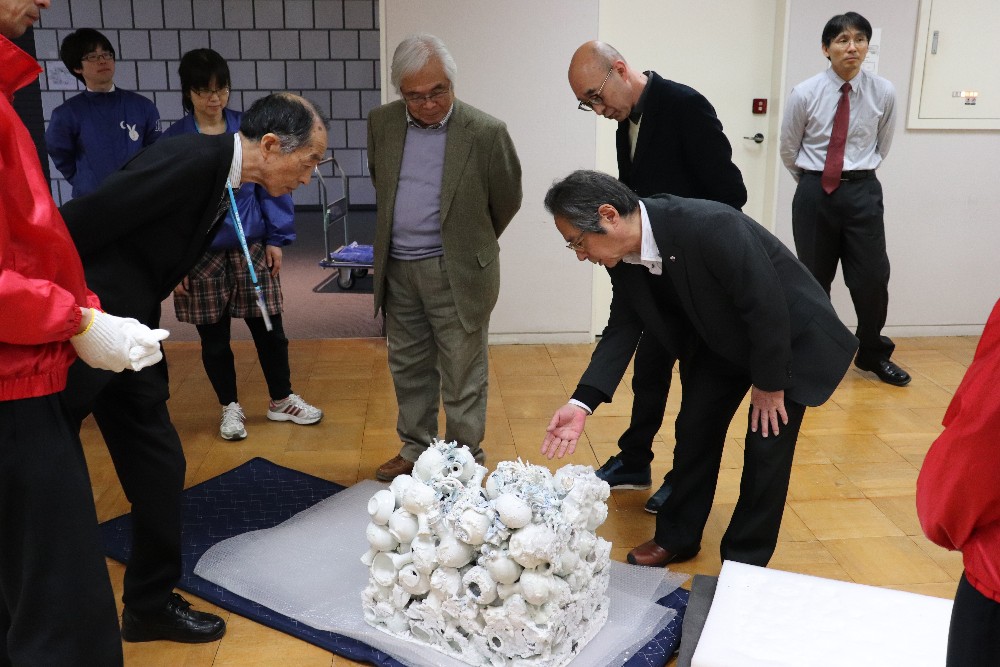