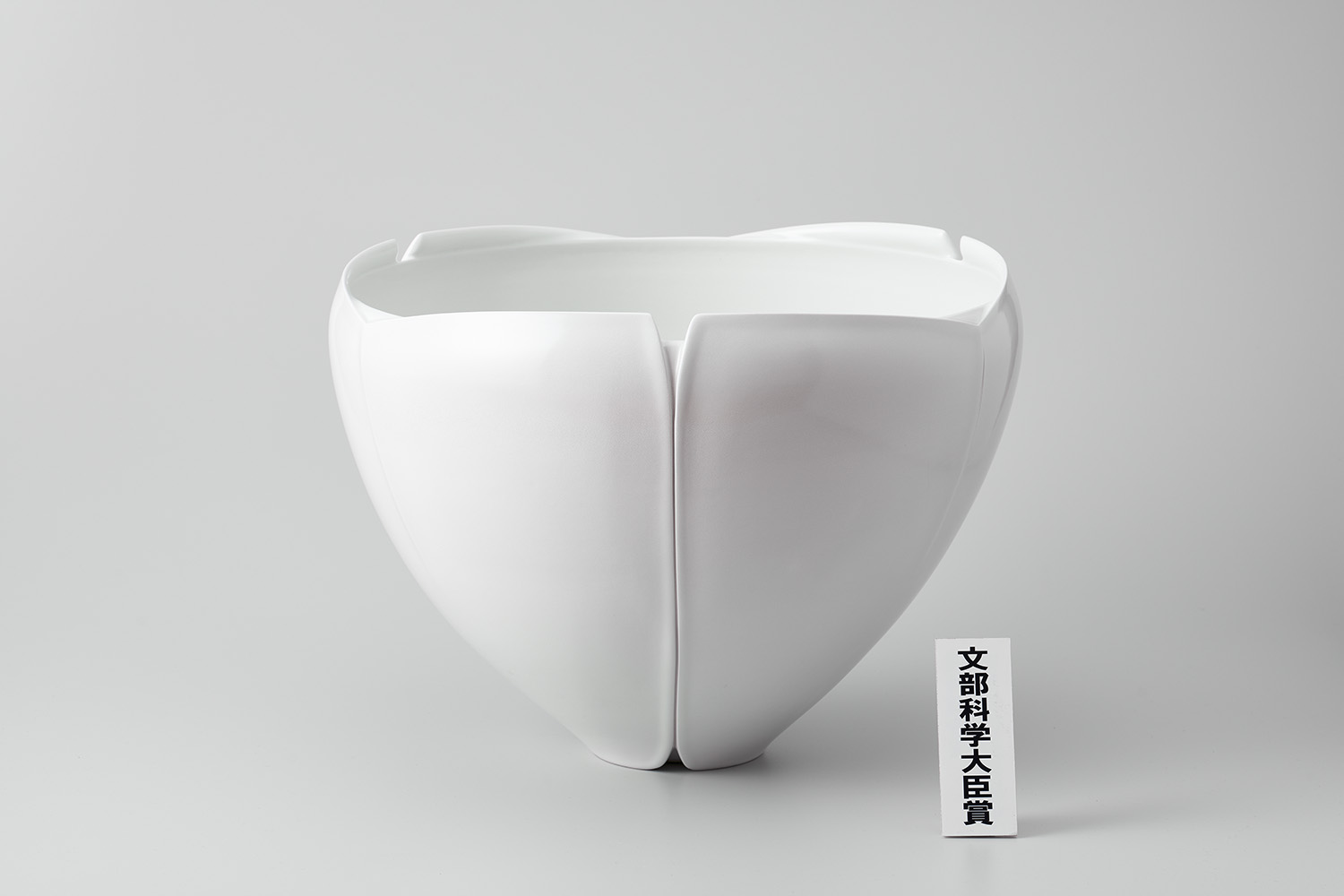 I aimed for a shape in which the expanding outlines caused by the centrifugal force of the potter`s wheel would bundle the center lines. Just as if the exoskeleton covers the inside. 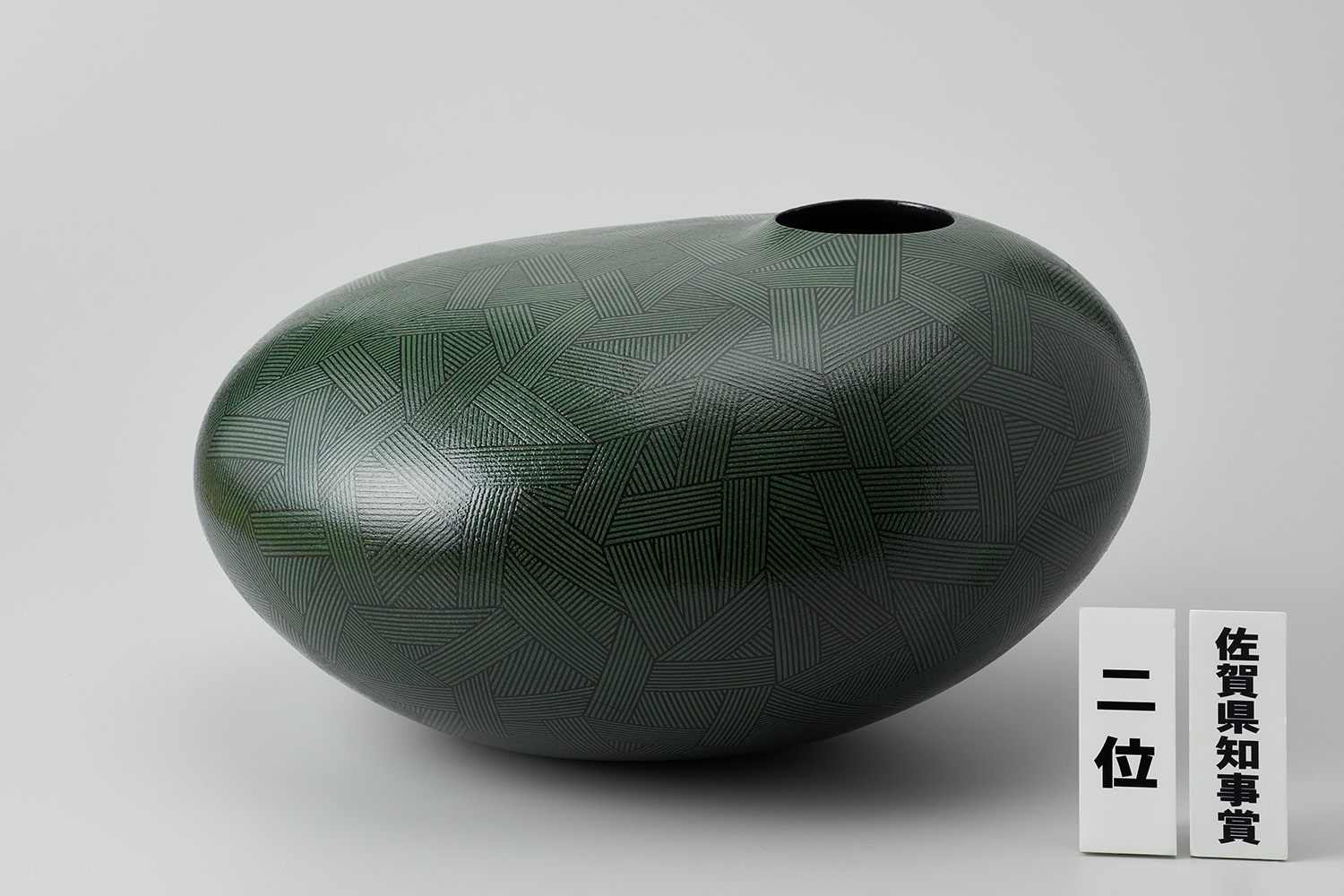 I would like to continue sending a signal full of brilliance and beauty so that the charming visual message would securely be delivered to the person watching. I feel disturbing trends in the natural disasters that occur every year as well as in politics. It feels like living in heavy air and I have trouble breathing. I sensitively feel that there are little joys amid this and I wondered whether I couldn`t make use of those, so I produced with the imagination that a beautiful and kind woman would bring us good things. 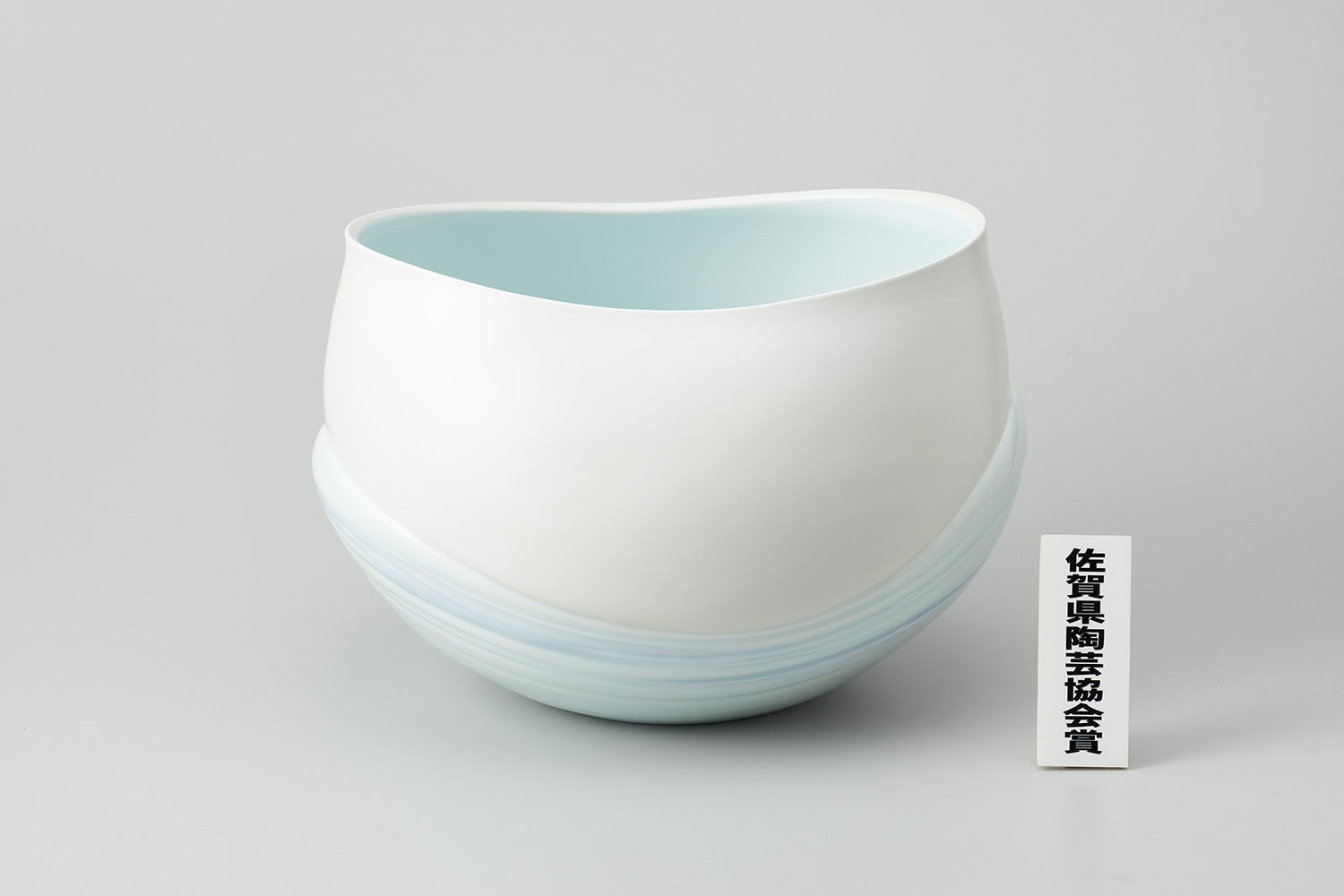 I used hard-paste clay and shaped at the potter`s wheel.

I expressed water that flows through spring`s rich nature. 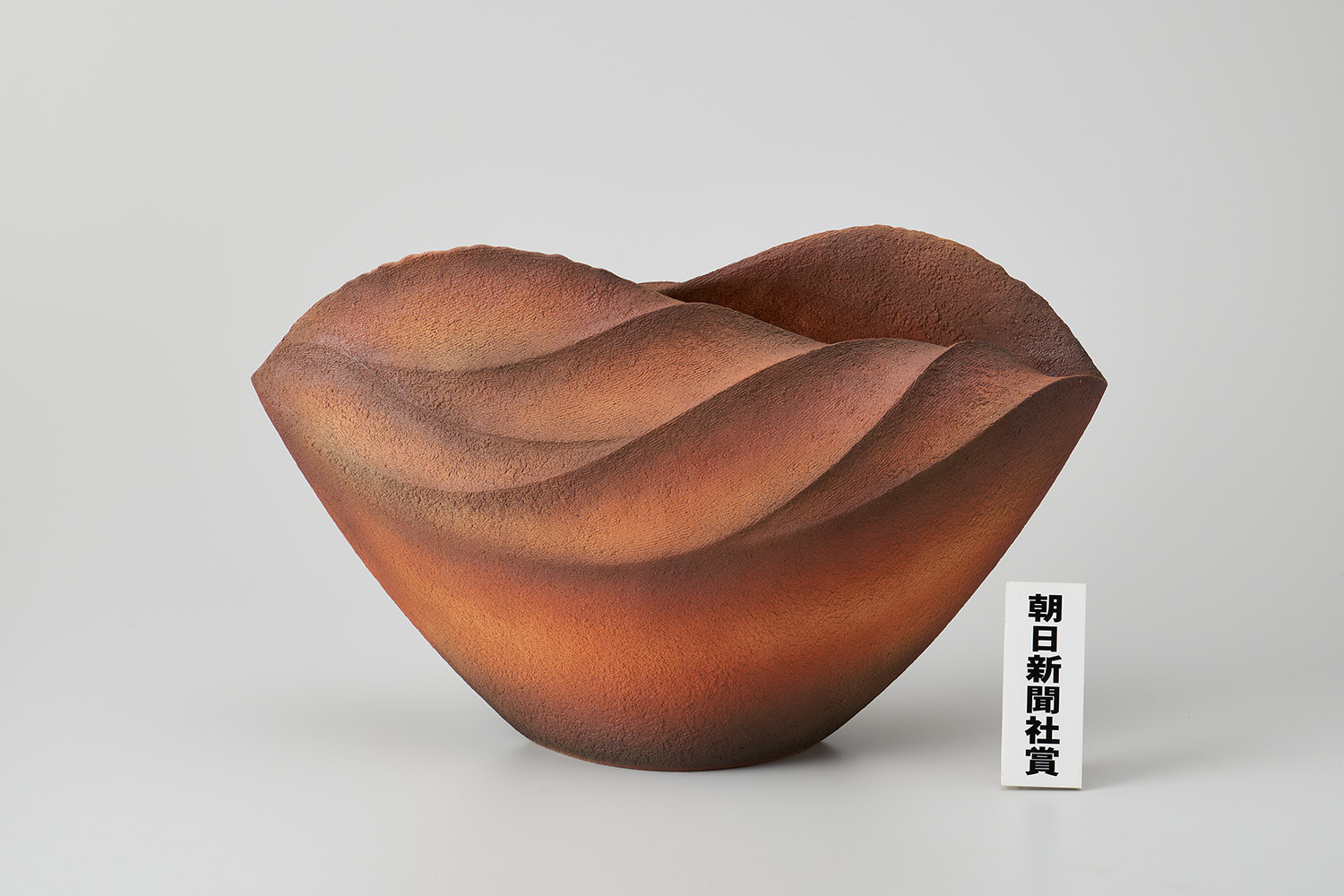 I wanted to express the feeling of the material earth and therefore mixed in plenty of quartz sand when molding. Also, I left the expression of the surface in a rough state.

Regarding the shape of the vessel, I molded it hoping that depending on the point of view it would look like a range of mountains or swell of waves. 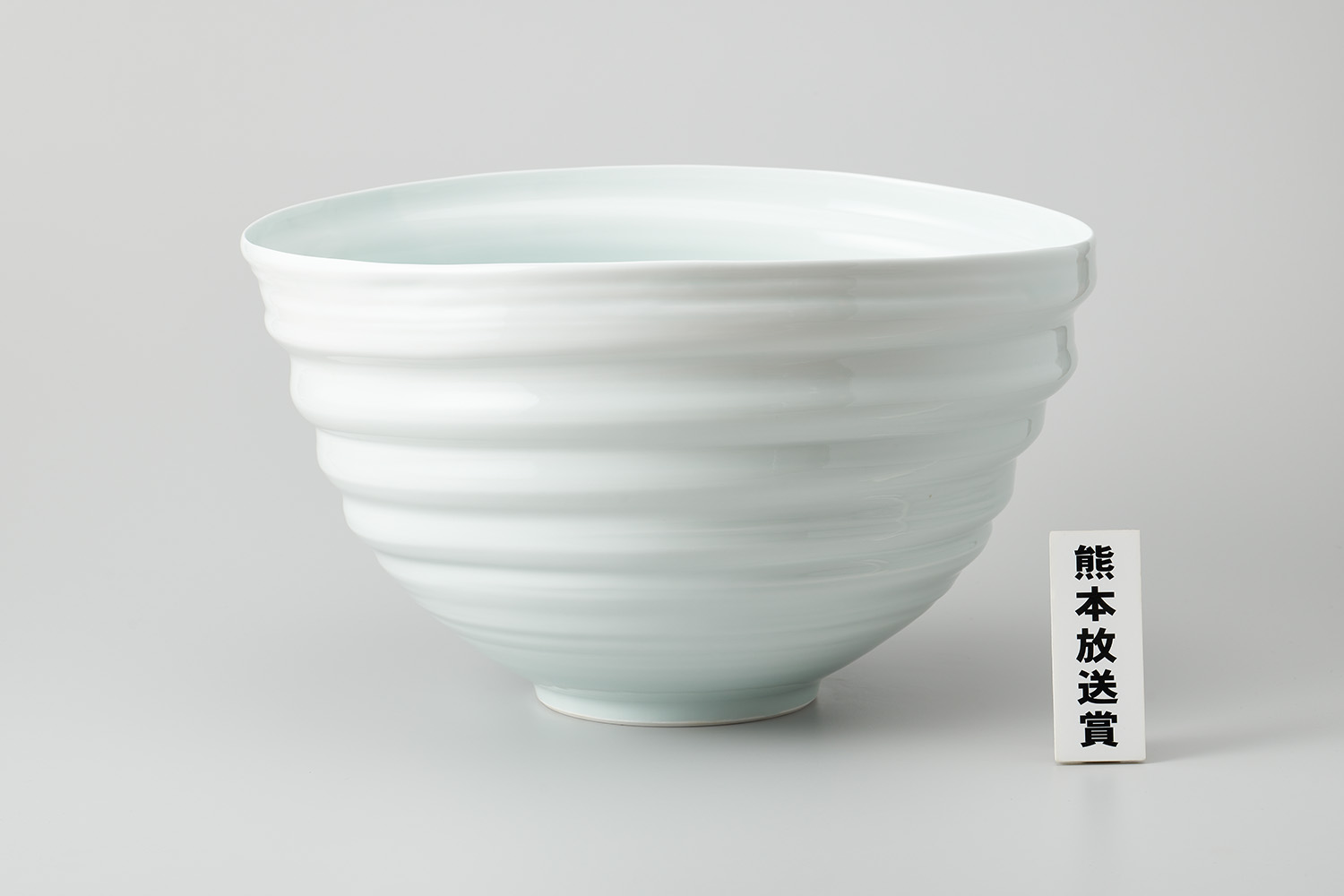 I am from Niigata Prefecture so I recalled the time I lived there and produced this porcelain aiming to express the scenery of snow dancing in the wind. 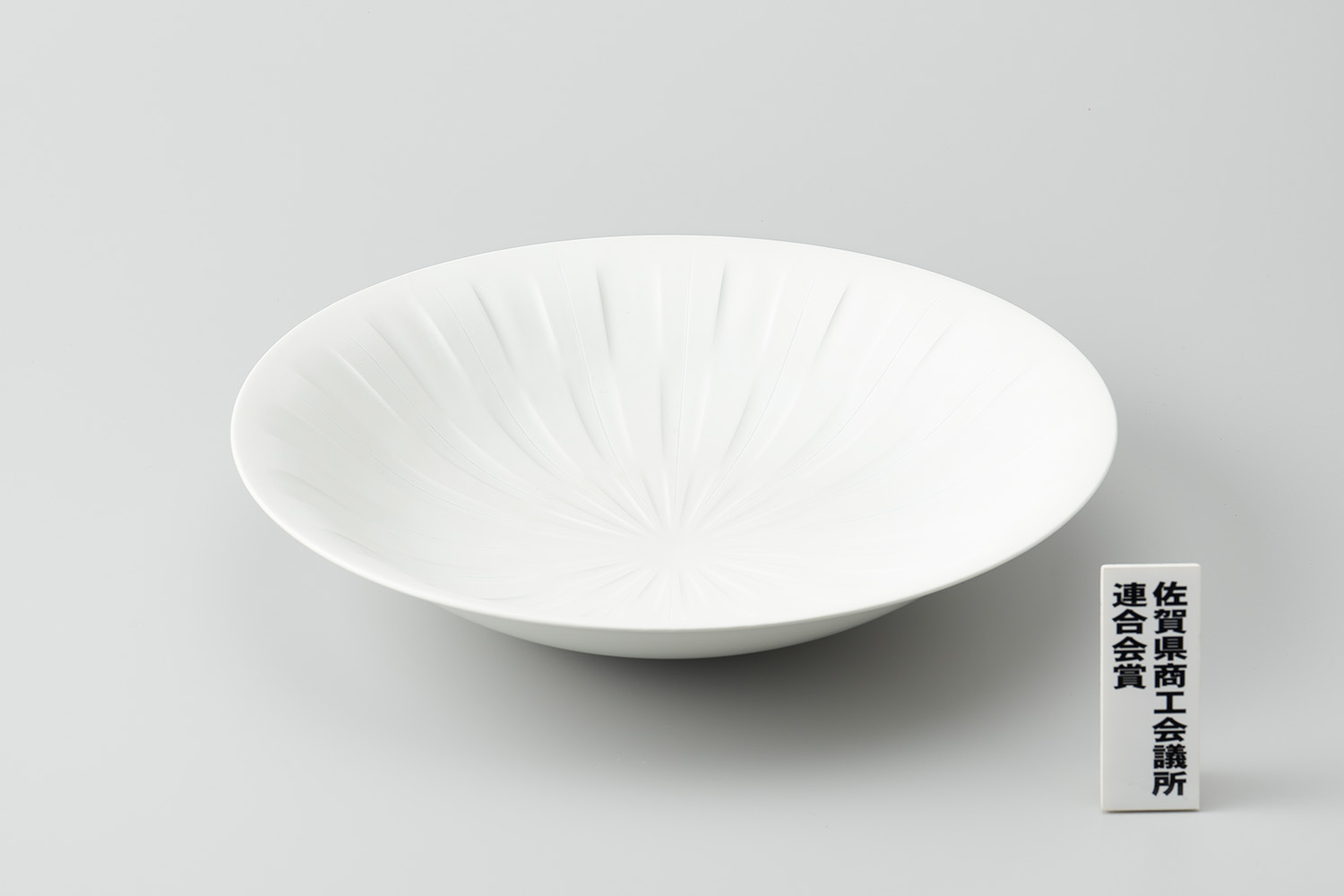 I produced this piece, using the inlaying over glaze deriving from the enamel of white porcelain. I expressed more three-dimensionality and depth by putting carves in the bowl and inlaying those with enamel.

I inlayed matt types as well as polished types of enamel so the expression of the piece of art changes depending on the angle it is watched from and the lighting conditions. 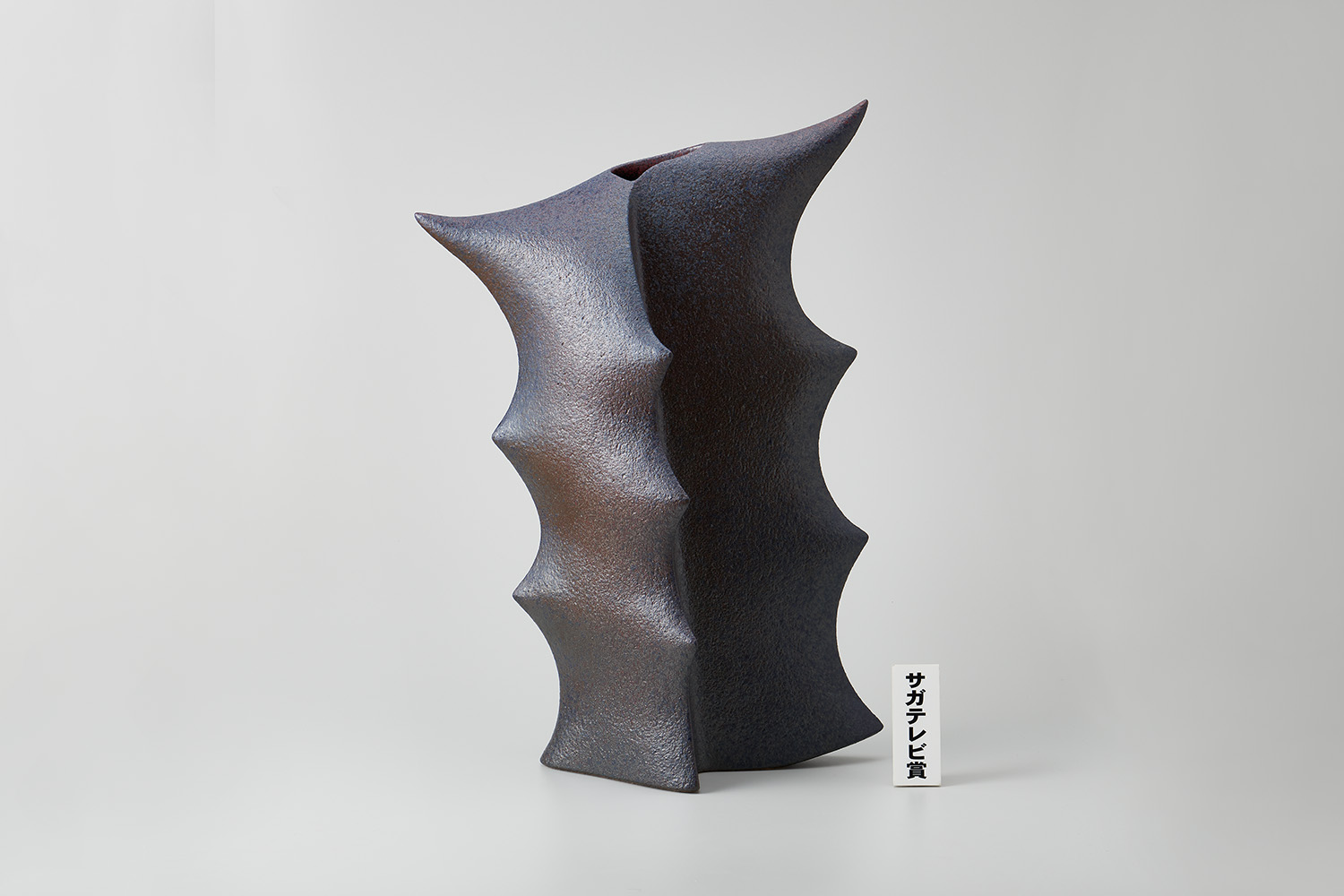 Shaped by hand, ceramic glazed and fired by deoxidization.

In the recent productions, I am determined to treasure the development from the former piece of art as well as the prospect hereafter. 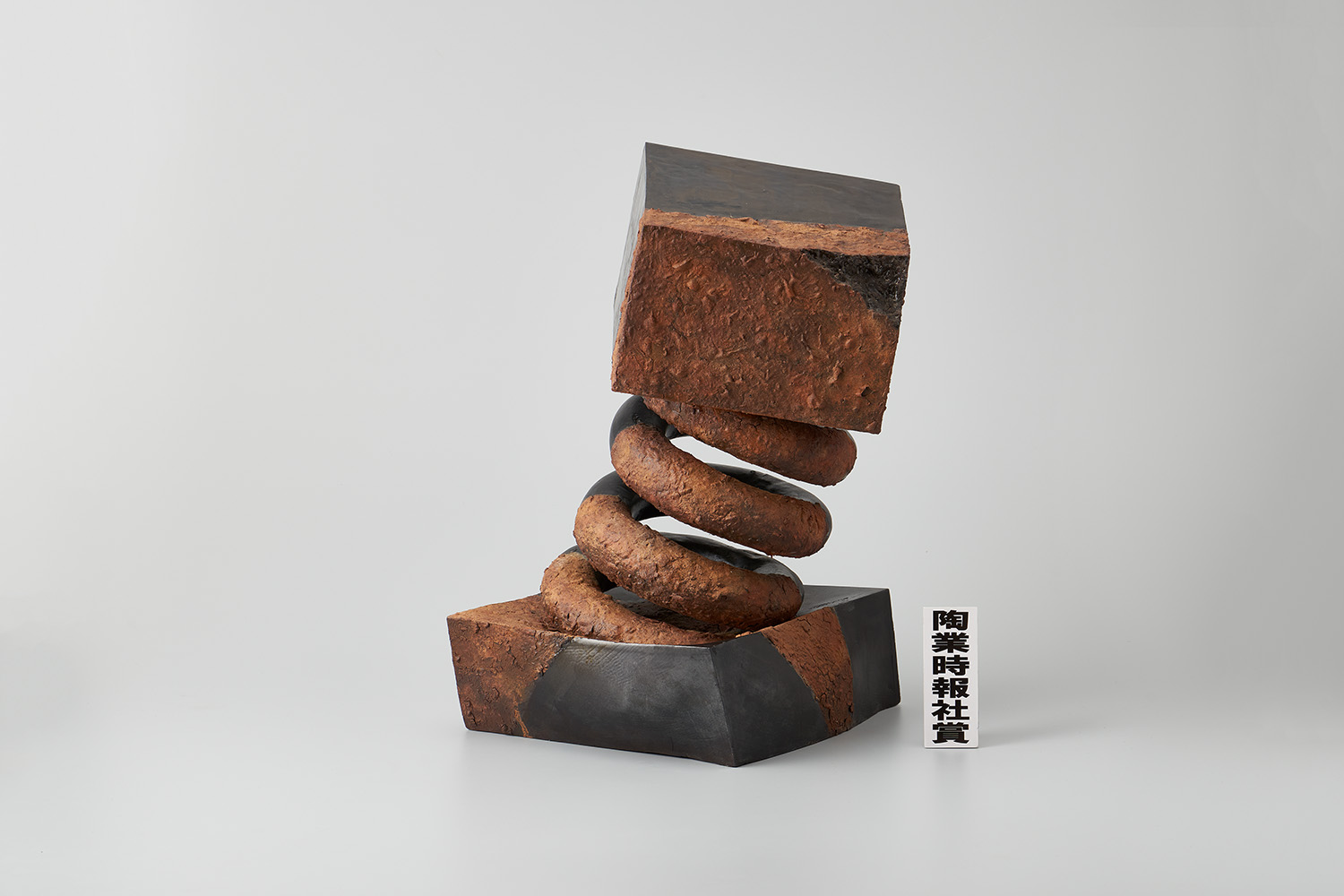 A battle of earth and flames. Even if we try to predict and control the coincidences of change in mechanical kilns, it does not befall the inexpert discernment by a lot.

Soft earth changes its shape during the process of drying and firing and when it becomes plastic the elasticity of the spring is already destroyed by the fire, the spiral spring slants and sintering occurs just before the collapse. What can be heard from inside the spiral? 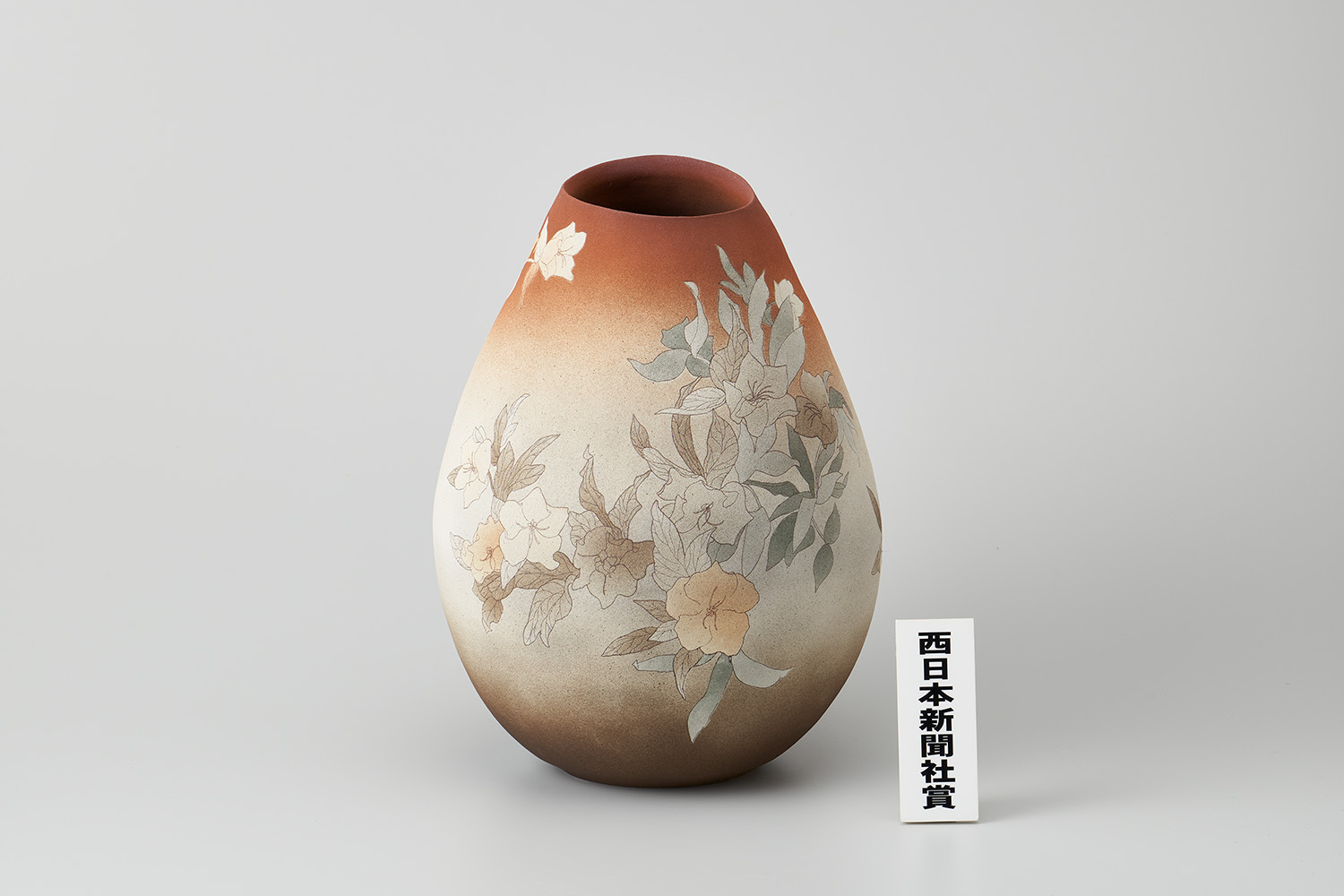 I used the [scratching off method], took care of each and every line and produced with the aspiration of creating a distinct memory.

I expressed the eternity of the “limits of beauty” of flowers. 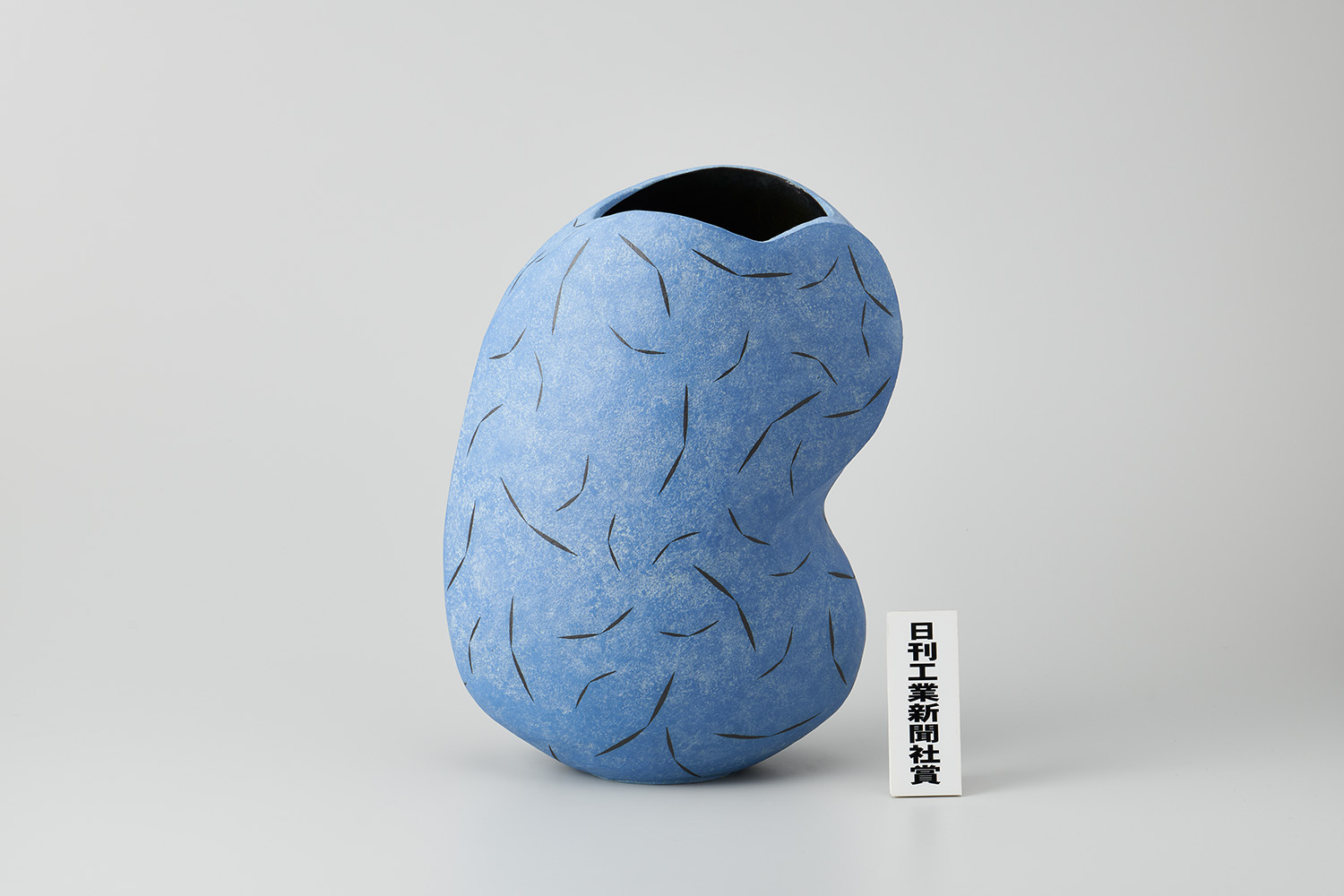 A handful of earth embraces the thoughts in the hand.

The repetition of the act of piling up earth becomes the shape of the thought.

The components of the pattern select and extract the shape of the thought.

Spinning the earth, undergoing the purification of fire, I turned it into pottery. 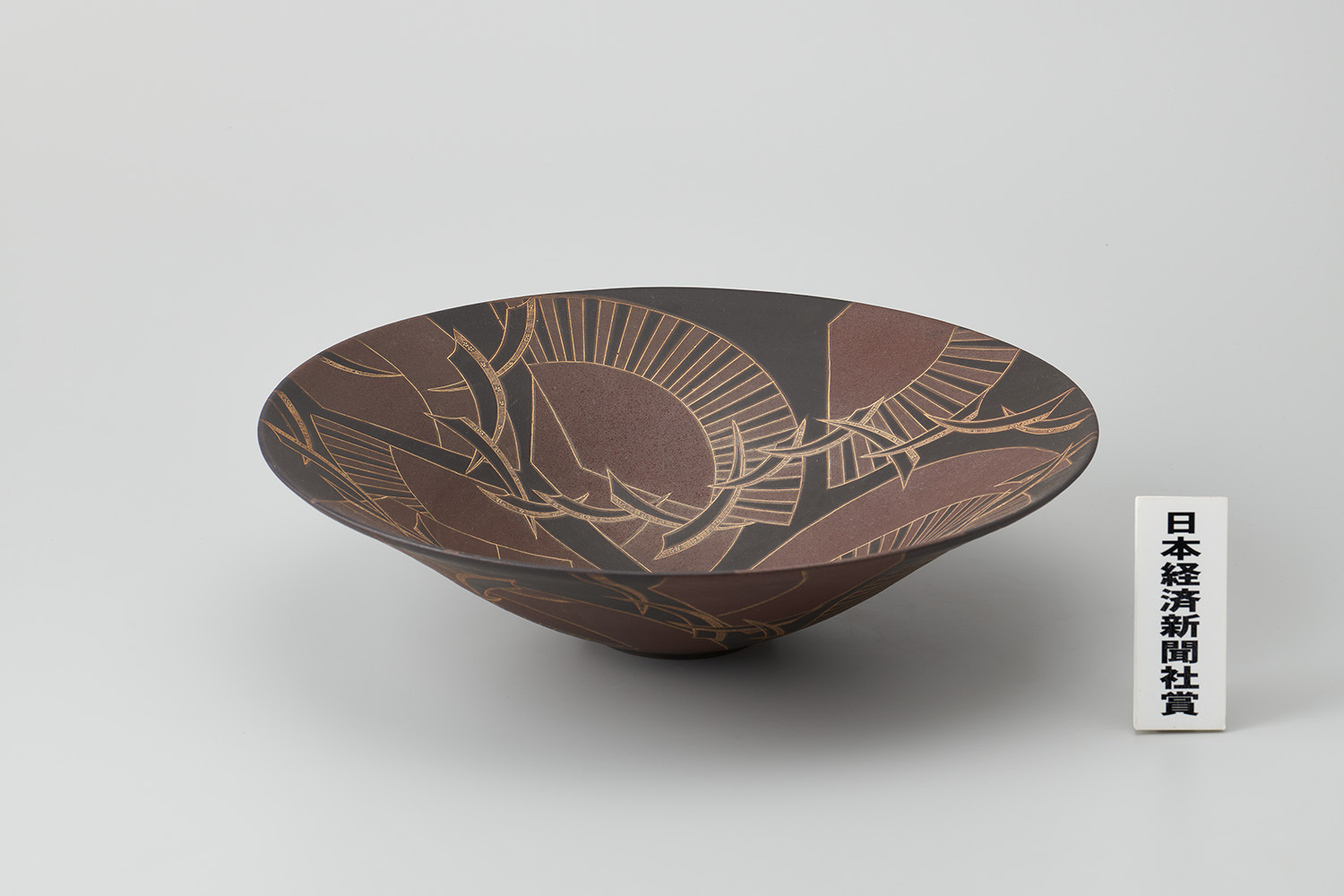 With the motive of folding fans dancing in the wind, I produced with the nostalgic thought of peace.

I shaped at the potter`s wheel and painted with the inlaying method.

I put into shape the energy of a rich forest that raises life. 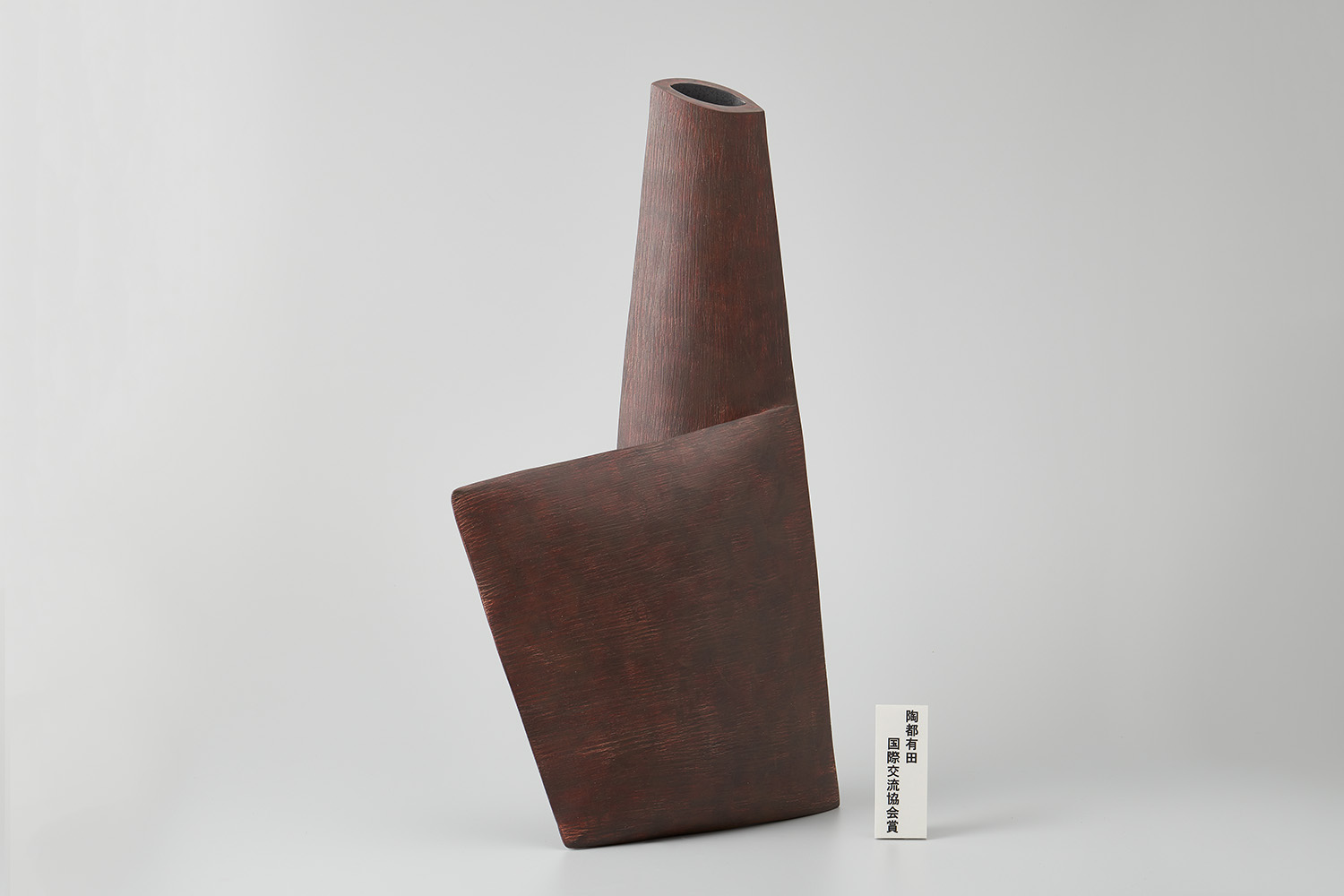 The shape of the piece of art is inspired by the original vestiges that possess a mysterious aura like the dolmen and menhir remaining in the ancient megalith ruins such as Stonehenge. Also, the orange and black decorations on the surface are made with the terrasigillata method that began in Italy and Greece in the pre-era. Terrasigillata is a type of ceramic from Greece and Italy in which a liquid that is extracted from a supernatant fluid finer than water particles in earth is applied as coating on the shaped and dried piece of ceramic which is then fired. This is another thing that I manifested my childish heart in.

First of all, I would like to offer my hearty congratulations that the 117th Arita International Ceramics Competition that had to be cancelled last year as a measure against the Coronavirus that has started spreading worldwide since the end of 2019, is held this year.

The winner of the first prize (MEXT Award) “Hakujihachi” by Seigo Nakamura is a piece of art that surely lets you understand the technical finesse and power of expression of the creator. It was chosen for the strong and comfortable build-up of kaolin that beautifully blends together with the scrupulous molding, giving an overwhelming impact regarding its sense of presence.

The winner of the Governor of Saga Prefecture Award “Ryokusaisenmonhenko” by Yodomu Yamaguchi posses a visible effect through the connection of the graceful curved surface that one could say is particular to the molding of earth and the simple yet chic pattern applied to it that makes the shape contain a truly rich feeling.

The winner of the Mayor of Arita Town Award “Shoui” by Ichiyou Sawada puts the sincere thoughts towards disaster and social insecurity together with the sense of rustic simplicity expressed through the disposition that makes use of the quality of the materials, turning them into a single prayer.

One of the topics of the examination this time is the fact that different members from the same family each received a prize. This was of course a coincidence within the examination results but the artists behind the winner of the Mayor of Arita Town Award Mrs. Sawada and the International Relations Association of the Porcelain City of Arita Award winner (Guglia) Leonardo Bartolini are a married couple and so are the artists behind the Nishi Nippon Shinbun Award (Kakiotoshikanshakuyakumonkaki) Mrs. Kiku Inoue and Yomiuri Shinbun Award (Shironomori) Mr. Yasushi Inoue. Also, the winner of the Nihon Keizai Shinbun Award (Kokuyuukakewakezouganbachi “Mai”) Mrs. Inoue Ruriko is the mother of Mr. Yasushi Inoue. The daily mutual encouragement in a close working environment can be pictured.

By the way, artistic molding is an act of creation in which the quality of the material is processed into a visible domain of expression using technical finesse. Therefore it is important that first of all, the creators themselves develop some close mutual sympathy with the material and perceive its quality in a well manner. Within this act, the potential of expression through the creator should naturally rise.

I hope that many outstanding pieces of art with a high level of completion will be submitted next time as well. 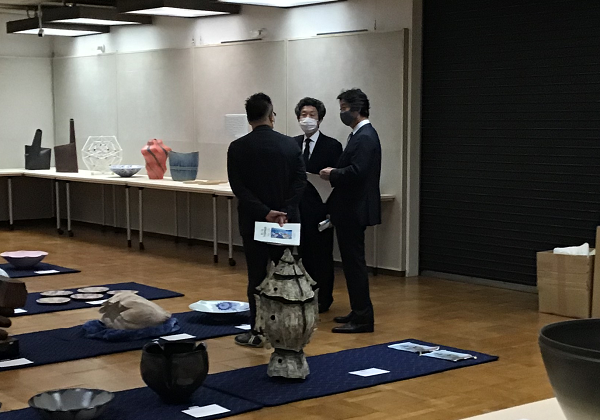